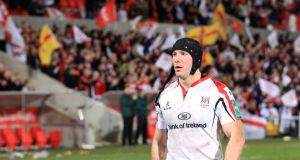 Stephen Ferris injured his left ankle in training but is expected to back for Leinster game in a fortnight’s time.

He’s only recently rehabilitated from a damaged right ankle, the severity of which enforced a 16-month playing sabbatical from the sport. Fortunately, if that’s the correct term, it’s his ‘good’ one, the left, that he rolled in training. The prognosis is that he should be fit to face Leinster at Ravenhill in a fortnight’s time.

Ulster’s treatment room is a tad overcrowded at present. The conjecture is that Roger Wilson and Dan Tuohy might return to the pitch before the league proper finishes, that hooker Rory Best and scrumhalf Ruan Pienaar could be back were Ulster to make a semi-final and that John Afoa’s disc issue in his back might preclude him donning the white jersey again ahead of his summer departure.

Robbie Diack is injured so Chris Henry switches to blindside flanker with Seán Doyle coming in at openside. Tom Court is restored to the frontrow, Darren Cave is back at outside centre while Andrew Trimble switches to left wing with Tommy Bowe named on the right. Declan Fitzpatrick, returns to the match squad for the first time in a couple of months following the return to play protocols governing concussion.

Returned to action
Glasgow recall Peter Horne, starting for the first time since a play-off game against Leinster last season. The centre returned to action earlier this month as a replacement in the win over Benetton Treviso and also featured off the bench in last weekend’s win at Munster.

Mark Bennett is introduced to the midfield with 21-year-old Finn Russell shifting to outhalf. There are no changes to the pack that played a pivotal role in the team’s superb 22-5 victory over Munster at Thomond Park last weekend. This is a massive game for both sides in the context of not only making the semi-finals but trying to secure a home one to boot.

Ulster are in second place in the table, five ahead of the Warriors – Leinster (69) lead the way and Munster (63) are third – but the top three have played a game more than the Scottish franchise. Glasgow’s game in hand is against Edinburgh and takes place tomorrow week.

‘Precious win’
Warriors’ head coach Gregor Townsend said: “Last week was a precious win for the club but we have another huge game in prospect at Scotstoun. Ulster are coming to Glasgow high on confidence and ahead of us in the league, so it’s a very important game for both clubs.

“What impressed me most last weekend was our players’ work-rate and how we kept taking the game to Munster. We’ll need to repeat that effort again. Our goal is to build on the win in Limerick and ensure we keep the momentum going over the next few weeks.”

Ulster’s eight-try salvo against Connacht last time out was impressive; the latter’s shortcomings on the day, notwithstanding. This, though, is a much tougher remit against a Glasgow.

It’ll take an exceptional performance for Ulster to win this one.