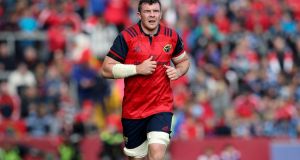 Munster’s Peter O’Mahony will make his fourth appearance since his return from injury. Photograph: Ryan Byrne/Inpho

Of the many tributes to Anthony Foley around Europe, few were more touching than the Ulster fans’ rendition of The Fields of Athenry during their team’s laboured if dramatic European Champions Cup win over Exeter.

While normal service, of a sort, will be resumed for the latest instalment in their rivalry at a sold-out Kingspan Stadium this evening, there is sure to be a warm reception for Munster given the sympathy toward them for the turmoil they went through last week.

Whether Munster, for their part, can again achieve the same mix of emotional intensity and clear-sighted focus must be doubtful though. Their performance in achieving a bonus-point win over Glasgow, and with 14 men for the last hour, astounded all onlookers, but it will be well nigh impossible to reprise.

That display also demonstrated that when finally able to field something amounting to a full-strength selection, Munster do have a highly competitive team. This will also therefore be a test of their strength in depth.

That said, Rassie Erasmus has managed to retain all but five of last week’s starting side, though they are a heavyweight quintet. CJ Stander, Conor Murray and Simon Zebo, probable starters against the All Blacks in Soldier Field on Saturday week, are all rested (as is outhalf Tyler Bleyendaal), while Keith Earls is suspended. Andrew Conway, Ronan O’Mahony, Ian Keatley, Duncan Williams and Jack O’Donoghue come into the team.

The other four of Munster’s eight players who were included in the Ireland squad all start, namely John Ryan, Billy Holland, Donnacha Ryan and Peter O’Mahony. It will be O’Mahony’s fourth outing on the comeback trail, having played 20, 40 and 60 minutes previously.

Although Les Kiss has made eight changes, Ulster have clearly targeted this home game, and a strong starting XV perhaps underlines their greater strength in depth. While three of their seven-strong contingent in the 34-man Ireland squad have been rested, namely Rory Best, Andrew Trimble and Jared Payne, Paddy Jackson, Luke Marshall and Craig Gilroy all start.

As expected, the seventh, Iain Henderson, is sidelined with the shoulder injury he sustained against Exeter.

Ulster, misfiring slightly of late, are boosted by the return from long-term injuries of lock Dan Tuohy and tighthead Wiehahn Herbst for their first senior appearances of the season, neither having played for Ulster since last December and January respectively.

The other changes up front see the return of co-captain Rob Herring and loosehead prop Callum Black, as well as Robbie Diack. With Stuart Olding sidelined for two weeks with a hip flexor strain, Darren Cave returns to the midfield, with Gilroy and Tommy Bowe promoted to the wings.

This enables Charles Piutau to revert to fullback. With his blinding acceleration and footwork, as well as strength, Piutau alone gives Ulster a clear edge in X-factor.

Conor Joyce could make his first appearance for Ulster in over two years after being named among the replacements. The 23-year-old backrow’s last outing was the memorable 19-17 win over Munster at Thomond Park in May 2014, the last time they beat their provincial rivals.

Munster are unbeaten in their last four encounters with Ulster, although it’s worth noting that in the sides’ last five meetings, the biggest winning margin has been four points. They’ve generally been entertaining affairs, and with no rain forecast and Nigel Owens in charge, that should be the case again here.

Both sides come into this provincial derby on the back of losing one last time out in the league. Ulster, unbeaten until losing to Connacht, remain top of the table going into this weekend’s seventh round of fixtures. Munster are fifth, albeit only three points adrift in what is shaping up to be a particularly competitive Pro12 campaign.

Ulster have won their last seven matches at the Kingspan Stadium in all tournaments since Scarlets were successful there by a point last February.

Time was when Munster couldn’t buy a win in Belfast, and although they are unbeaten on their last two visits, they have not gone three matches without defeat in Belfast since the second World War, which does seem to rather sum up the scale of the challenge facing them this evening. Forecast: Ulster to win

French cavalry aiming to knock Tiger Roll off his perch 18:32
R&A call for ‘common ground’ on golf’s distance debate 18:31
Darragh Kenny named leading show jumper of 2019 17:53
Cheltenham keeping a watching brief on coronavirus 16:41
Cian Healy out of remainder of Six Nations 16:27
Here is your handy guide to sport on television this week