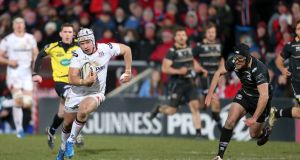 They badly needed the win after horribly tripping up twice and having Zebre at home always seemed to offer the softest landing possible to get Ulster’s play-off ambitions back on track and so it proved though, again, it was at times a struggle.

The win was duly delivered as was the crucial bonus point to send Ulster off on their break until March 25th with all they required.

Two tries in the first half from Nick Williams were added to in the second half by scores from Peter Browne and the bonus point score was nailed with three minutes to go by replacement Paul Marshall.

Paddy Jackson kicked three conversions and two penalties as Ulster, looking at times weary after just their five-day turnaround, took a while to build on their 20-0 half-time lead. Still, the main thing was that the five points were bagged as Les Kiss’s side – who remained in fourth – can now focus on their push to ultimately secure a semi-final place.

It didn’t start too well for the home side with Ulster opting to go for the corner off a first minute penalty only for Jackson to miss touch and kick it dead. Three minutes later, though, and Jackson, from longer range, opted for the posts and bisected them.

He did so again on seven minutes and then, after hitting the corner this time with a penalty to touch, Ulster launched a driving maul from which Williams spun off to score. Jackson converted the 10th minute try and Ulster were 13-0 up.

Then on 26 minutes Rory Scholes was over only for the TMO to rightly call an obstructing run by Luke Marshall and the score was ruled out and then, shortly afterwards, Stuart Olding was held up over the line.

It didn’t matter though as from the five-metre scrum, Williams bulldozed over and Jackson did the needful with the extras to take it to 20-0 on the half hour.

The half ended with no further score following five scrums on Ulster’s line with the Italians finally knocking on when having to move the ball wide.

After a pretty scrappy opening Ulster had another try ruled out after Luke Marshall’s break from deep ultimately saw Williams get over and briefly celebrate his hat-trick only for the TMO to adjudge that Rob Herring knocked-on.

Then, finally, just after the hour, Ulster managed to get some position in Zebre’s half and after first Rory Scholes and then Williams were held up short, Browne dived over from close range. Jackson missed the conversion - his first miss of the night - but the home side were now 25-0 up and now hunting down the bonus point.

But Zebre weren’t for lying down and again they managed to keep play in Ulster’s half and only a last-ditch tackle from Jacob Stockdale prevented Giulio Toniolatti from scoring.

Then, out of nowhere really, Olding, Jackson and replacement Darren Cave interchanged passes to allow fellow replacement Paul Marshall get the bonus point try at the posts with Jackson converting. Job done then ahead of the two-week break.

Replacements: G Roan for A De Marchi and I McKinley for E Padovani both half-time, P Ceccarelli for D Chistolini and L Burgess for F Semenzato both 53mins, F Cristiano for F Ruzza 65mins, G Koegelenberg for Q Geldenhuys 67 mins.

1 Andy Farrell recalls 13 players to Ireland squad ahead of England clash
2 Eddie Jones continues to revel in putting rugby’s nose out of joint
3 Tipping Point: Eddie Jones’s rhetoric is out of place in a febrile political climate
4 Rory McIlroy heads for Mexico with ‘WGC slam’ in sight
5 All in the Game: No Moore medals for Steven Gerrard
Real news has value SUBSCRIBE

Rory McIlroy heads for Mexico with ‘WGC slam’ in sight 16:58
Tiger Roll on track for Aintree after solid run in Navan 16:17
Andy Farrell recalls 13 players to Ireland squad ahead of England clash 15:11
Leaving Cert prep forces Beibhinn Parsons out of rest of Six Nations 15:01
Kieren Westwood: ‘I feel obliged to clear my name and defend myself’ 14:01
Here is your handy guide to sport on television this week