The only way is up for promising Garry Ringrose 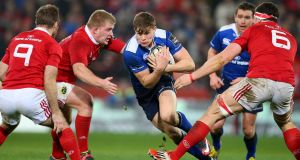 Garry Ringrose: showed his undoubted quality in the win over Munster at Thomond Park and has been tipped for stardom by the legendary Brian O’Driscoll. Photograph: Billy Stickland/Inpho

If only everyone saw rugby and could play the game in the simple terms that Seán O’Brien’s athleticism and brute strength allow.

The creation of that Isa Nacewa try last Sunday evening in Limerick was reminiscent of an outside break made by Brian O’Driscoll way back in August 1999 at Donnybrook.

That day he whizzed past big South African centre Riaz Fredricks in a similar manner to how Ringrose made Dave Foley and Jack O’Donoghue appear like statues.

The difference was Ringrose rode the last tackle from Andrew Conway before putting Nacewa under the posts whereas O’Driscoll’s chip and chase ran dead.

They were both 20, both doing things in training that made veteran professionals stop and stare. Difference, again, is Ringrose, at 6ft 1in and still growing at around 14 stone, will become a physically superior specimen.

A solid example of this was the tackle he put into Munster backrow Robin Copeland’s mid-section late in the second half.

He couldn’t even make the bench for the trips to Bath and Toulon (or the return leg).

But the word has been out about this 20-year-old for some time.

Anyone who saw the 2014 Under-20s World Cup in New Zealand, after which Ringrose was nominated for World Rugby young player of the year can attest.

Or even those who witnessed his stunning 80-metre try, which he converted from the touchline, in the 2013 Leinster schools final at the RDS would have had a fair idea.

“I think it is an important lesson for anyone playing the game; it comes down to the preparation you put in day on day. He is somebody that epitomises that.”

Initially Brian O’Driscoll may have seemed a little tweet happy or mischievous when suggesting on Sunday night that Ringrose should be wearing the number 13 jersey when Wales come to Dublin in February. But then he proceeded to back it up against all comers.

“This guy is the real deal. Just wait,” he added

Naturally Cullen was hardly overjoyed by his old team-mate’s suggestion.

“We tried to just bring Garry through slowly this season...I’ve no influence who starts for Ireland in Six Nations. ”

In fact, he does. If Cullen continues to select Ringrose at outside centre ahead of the soon to be departed Ben Te’o then the case for rapid promotion may become irresistible for Joe Schmidt. The same Ireland coach who has already had Ringrose down in Carton House for training.

“We want our young players to be able to play for Leinster for 12 to 15 years,” Cullen added.

“That’s an important part of it. There are lots of games this season and we want to make sure guys can come through in the right manner.”

Fair enough. But no one else is doing what Ringrose is doing right now.