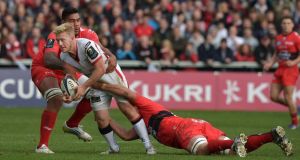 Stuart Olding has been released from the Ireland camp to line out for Ulster against Newport-Gwent Dragons on saturday night (7.35pm).

The centre, however, will line out at fullback for Neil Doak’s side, with Darren Cave selected at 13 and Stuart McCloskey picked at 12. Wing Peter Nelson will debut for the province.

In total, there are seven personnel changes and two positional switches to the team that lost to Toulon, but the halfbacks remains the same, with Paddy Jackson, overlooked by Ireland coach Joe Schmidt ahead of the autumn internationals, continuing alongside scrumhalf Paul Marhsall.

In the frontrow, Callum Black is named at loosehead, with Rob Herring at hooker and Wiehahn Herbst retained as tighthead prop. Lewis Stevenson and Franco van der Merwe also remain in situ in the secondrow.

There will be a debut for Seán Reidy on the openside of the backrow, with Clive Ross at blindside and Roger Wilson at number eight.

Dragons will give a first PRO12 start to new signing Rhys Williams, who recently arrived from Carmarthen Quins on a month-long loan.

“I’d like to think that I am a direct centre and that I put my tackles in, I’ve played 12 most of my career but can also slot in at 13.”