Stander delivers in nick of time as Munster beat Ospreys 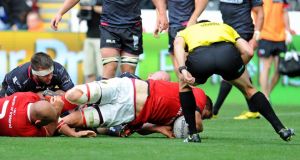 CJ Stander touches down for a try with the final play of the game as Munster beat Ospreys in their Guinness Pro 12 game at Liberty Stadium in Swansea. Photograph: Ian Cook/Inpho

CJ Stander struck with the final play of the game to help Munster maintain their winning start to the Guinness Pro12 season and break Ospreys hearts in Swansea.

Six penalties from outhalf Sam Davies looked to have put the Welsh side on course to claim the victory as they led by five points with time running out.

But Munster made the most of one final chance as they battered away at the Ospreys line during the final 90 seconds, before replacement Stander managed to work his way over the line, with Ian Keatley’s conversion sealing the win.

The Ospreys, missing 20 players through a combination of World Cup duty and injuries, were driven on by an emotional pre-match tribute to former backrower Jerry Collins at their first home game since the All Black and his wife Alana were killed in a car accident in France in June.

Davies kicked them into an early lead but Saili’s first forward foray caused chaos and set up the position for Bleyendaal to level the scores.

Fitzgerald came close to grabbing the first try as he raced onto Cathal Sheridan’s astute cross-kick in the 25th minute, but the Ireland under-20 international could not dot down under pressure from Sam Parry.

Bleyendaal kicked the visitors ahead, but a string of penalties either side of the break allowed Davies to respond and boot the Ospreys into a six-point lead shortly after the interval.

Munster needed a response and they found one. A purposeful maul sucked in hordes of Ospreys defenders to leave Fitzgerald with a simple finish on the opposite flank from Bleyendaal’s cross-kick.

The conversion put the visitors a point to the good, but they put themselves back under the cosh when Robin Copeland was penalised for holding on while running a kick back out of his 22, before a weak scrum yielded another penalty.

Davies made no mistake and Munster were suddenly facing a five-point deficit. But Ospreys errors surrendered field position and they were clinically picked off with the final play of the game.

“It was not pretty at times but it was effective and we have ended up with two tries and a win,” said head coach Anthony Foley.

“Not many teams win down here so we are delighted to have got a result. Ospreys beat us home and away last season so we take great pride from this result.”