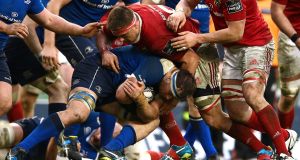 The last time Leinster hosted Munster at the Aviva stadium was last April when the home side prevailed 16-13. On Saturday afternoon they square up again at the same venue.

The physical collisions were brutal and unrelenting the last day but there was precious little space created or perhaps more accurately exploited.

It was a riveting spectacle, exclusively because the result was in the balance up until the final play, in the shadow of the Leinster posts, an extension in timbre, of the match in general, on the scoreboard. It was tight and nerve jangling but error strewn too.

Leinster’s Johnny Sexton, voted man of the match, and playing in his first derby match since 2012, contributed his side’s entire tally, as did his Munster counterpart, Johnny Holland, who notched all 13 points in his 57 minutes on the pitch.

Sexton should be there to guide Leinster again come Saturday but unfortunately Holland won’t, this gifted 25-year-old outhalf, forced to retire last month with a chronic hamstring problem.

There are other changes too to the Munster coaching hierarchy and also in the personnel of both squads. In the circumstances can sifting through the statistical remnants from the April encounter have any relevance to Saturday’s match? Definitely, Maybe as Oasis once ventured.

The teams kicked the ball on 76 occasions during the 80-plus minutes of the match. At face value Leinster relied heavily on the boot of Sexton (21), while Munster split the kicking duties more evenly between their halfbacks, Conor Murray (12) and Holland (13).

However the base information is misleading to some degree when breaking down those numbers. Sexton’s tally comprises of four successful placekicks, five kick-off/re-starts, including a 22 dropout, seven penalties to touch; on only five occasions did he kick the ball in general play.

Holland’s stats were strikingly similar in that he too looked to attack with ball-in-hand: three placekicks, four kick-off/re-starts and two penalties to touch, supplemented by a brace of wiper or grubber kicks to touch and a clearance to touch from the Munster 22.

When Ian Keatley was introduced for Holland on 57 minutes, he put boot to ball seven times but only twice in general play. What’s more relevant come the weekend from a Munster viewpoint is the huge influence that Murray has on the way the province plays and particularly one outstanding aspect of his game.

The Ireland scrumhalf kicked the ball on 12 occasions but seven of those were his forte, box-kicks, and three times given the pinpoint accuracy and athleticism of the chasers, Munster regained possession. This is likely to be a regular gambit on Saturday afternoon at the Aviva stadium, when the likely presence of Darren Sweetnam will increase the aerial ability.

Leinster scrumhalf Eoin Reddan, now retired after an outstanding career, but along with Luke McGrath, who came on as a replacement, the pair box-kicked five times, with Leinster players winning one in the air and a turnover in the tackle.

Munster had more possession, more territory and they attacked closer in, initially using their forwards in pods to hammer away, at the blue line, wave after wave, before looking to wider avenues. They spurned two gilt-edged try scoring opportunities in the second half when a player sought contact rather than numbers-up outside.

Leinster also looked to trundle forward through their pack but were also looking to get around the edges of Munster’s midfield defence and in this respect, Isa Nacewa, as last man out wide, used a grubber-kick down the touchline on three occasions to try and turn the Munster defence.

The backline operated like the popper on a whip, arriving late and from depth but they rarely fixed the inside defenders against a well marshalled Munster line in which Rory Scannell was excellent.

Ignoring the fact that it’s possible to trace the genetics of any score back to a particular moment, only one, from the combined tally of five penalties, two tries and two conversions, came as a result of a kick, and ironically it was a loose one that ‘created’ the chance for opposition.

Munster and Leinster patterns have evolved from last season but they are far from unrecognisable. Away from the formalities, placekicks, re-starts and penalties to touch, both teams are likely to put a premium on contestable box-kicks as a major gambit with the boot: that and cross-kicks.

The only area in terms of the kicking statistics from the last day in which there was a clearly defined winner was that Sexton was blemish free with his placekicking; ultimately after kicking around everything else it was the figure that mattered most.

1 Gordon D’Arcy: If South Africa moves up north, it could all go south
2 Charlesland Golf Club set to close permanently in December
3 South African franchises could join Pro16 by next March
4 Davy Fitzgerald has issues with GAA’s plans for League final
5 When Down’s 1960 All-Ireland victory brought down barriers
Real news has value SUBSCRIBE

Connacht setting sights high ahead of new Pro14 season 07:00
Gordon D’Arcy: If South Africa moves up north, it could all go south 06:00
Seán Moran: Covid ripple effect leaves GAA in vulnerable position 06:00
Davy Fitzgerald has issues with GAA’s plans for League final 06:00
When Down’s 1960 All-Ireland victory brought down barriers 06:00
Here is your handy guide to sport on television this week