Robin Copeland given a two-week suspension 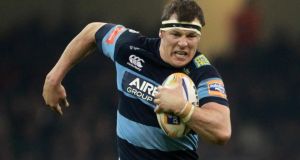 He was dismissed for bringing his boot down on the head on Scarlets’ fullback Liam Williams, who coincidentally had a hearing of his own, after receving two yellow cards and therefore a red, in the same match at the Millennium stadium.

Williams had received a yellow card for that incident, his first of the match, which later resulted in a red card being issued for second of the two yellow cards. However the independent citing commissioner at the match cited Liam Williams for the dangerous tackle, in effect upgrading the yellow card to a red card.

The independent disciplinary committee convened for the hearing, chaired by David Martin (Ireland), along with George Spotswood and Pat Barriscale (also Ireland), upheld the citing and imposed the sanction of a two-week suspension ending on midnight on Sunday May 4th, 2014.

The committee’s view was that here was a heavy onus on the tackling player to ensure the safety of the player in the air. Both players have the right of appeal.

Rangers get the party started with title in touching distance 17:31
Southampton send Sheffield United further into the mire 17:25
Gordon Elliott confirms Denise Foster will take over licence 16:42
Mícheál Naughton appointed president of the LGFA 16:32
Burnley hold on for a point to leave Arsenal stuck in 10th 14:54
Here is your handy guide to sport on television this week