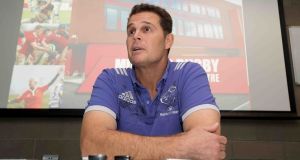 Rassie Erasmus will sample his first experience of Thomond Park as Munster’s new director of rugby on Saturday when the province host Edinburgh, mindful that the home defeat to Cardiff in Cork a week and a half ago is a wound that needs salving.

That defeat constitutes the one blemish in Munster’s start to the season, sandwiched as it has been by gritty away wins in Wales over the Scarlets and the Dragons.

“Our first home game was two weeks ago, but this is the first one at Thomond Park, so hopefully this one will go much better,” says Erasmus. “It will definitely be an experience. I’ve seen a lot on TV, but never experienced it myself. Our job is to earn the right to have that experience, and we didn’t do it in our first home game. Obviously it was in a different venue, and we have to earn that, and the players know that.

“We’ve got a tough challenge and it will be certainly one to test us, to show the people that we earn the atmosphere and that support they give us. I’m really looking forward to it; it’s going to be a privilege.”

That defeat to Cardiff still hurts.

“Away wins certainly build confidence and home losses take away a lot of confidence,” Erasmus says. “They are the two ways you must see it. I think the biggest thing about our home loss is it takes you a step back and it really takes guts and hard work and accuracy to win that back, and it takes longer to win it back than lose it. But it shouldn’t be the thing that drives us. It’s our plan on the field that drives us.”

Including Earls, Munster are effectively down six centres, with Francis Saili, Sam Arnold, Rory Scannell and Collie O’Shea also all injured, while Jaco Taute’s work permit has still not been sorted out.

“There are six guys out, although I’m not saying the seventh and eighth guys are playing,” Erasmus says. “We are building squad depth and we are building character. Jaco’s work permit isn’t quite there, so it is definitely challenging and some guys are swimming through this and getting there and getting better. Some guys are struggling and will get better.

“So it is what it is and, as long as we can keep winning, the moment those guys comeback and are fully fit and are back to their best, we suddenly have eight guys that can play centre.

“Then if we get an injury, we know we can handle that. That’s a positive.”

Peter O’Mahony has returned to modified training, but this is not deemed a setback, with Erasmus maintaining that Munster are being deliberately overcautious with the flanker.

“We have got a bulk of loose forwards fit and available and playing well,” he says. “I’d rather take a week or so longer. There is no setback with him. He was thinking game three or four, but because the guys are fit and playing really well, why risk him? A guy like him will always be missed on the field, but we might even stretch till after next week. But listen, he is taking part in mauling, in scrumming and everything.

“We’ve got an opportunity to be cautions here and we are taking it that way.”

By the same token, Robin Copeland will be asked to play another game for Young Munster, away to Cork Constitution this Saturday, after his return from injury in the Ulster Bank League last weekend.

Tommy O’Donnell, who missed last week’s game with concussion, will again be rested and, as with O’Shea, Andrew Conway will also follow return-to-play protocols after both players sustained concussion last Saturday.

Simon Zebo should be recovered from his rib injury next week, while Kevin O’Byrne (elbow), Mark Chisholm (concussion), Sean McCarthy (knee) and Mike Sherry (back) all remain sidelined.