Rassie Erasmus has ‘no problem’ with Dan Carter facing Munster 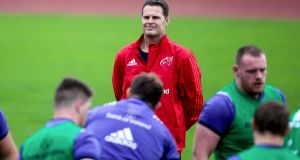 Munster coach Rassie Erasmus says he wants “justice to take its course” in the case of Dan Carter, Joe Rokococo and Juan Imhoff.

The Racing 92 trio will come face to face with Munster on Sunday in their Champions Cup opener in Paris.

They attended an anti-doping hearing on Wednesday after they were found with traces of a banned corticosteroids in samples taken from them following June’s Top14 final victory over Toulon.

Carter has his own fitness worries ahead of the pool one opener – he has missed Racing’s last two games with a calf issue – but Erasmus says he has no problem with the trio being allowed to play.

“It is so out of our control and it shouldn’t have any influence on you,” said Erasmus.

“I know Dan Carter for a long time, I have coached against him and played against him. He is such an icon and I would never say anything bad about him. I have no problem in the other two players involved in this match. Let justice take its course.”

Meanwhile, Ireland and Munster back Keith Earls is in a race against time to feature in the game in Paris.

The 29-year-old, who has played in the centre for his province recently, left the field concussed in the 57th minute of their 25-14 defeat to Leinster last weekend.

The Limerick man is following the return-to-play protocols but Erasmus says he is “a big worry”.

Loosehead prop Dave Kilcoyne is also following the concussion protocols, and with fellow international number one James Cronin suspended, his involvement is crucial.

Cronin has been banned for four weeks after he was cited for a stamp on Leinster scrumhalf Jamison Gibson-Park in their Pro12 defeat at Aviva Stadium.

But Erasmus says he accepts the ban and Munster need to move forward and focus on the French.

“I haven’t seen the paperwork and the final judgement. Four weeks, for the end result of what happened on the pitch from my side, I think let’s accept it.

“It’s like an injury. You can lose a guy on Friday because of flu coming into a game. If you lose a guy because of foul play or injury any of those things, you just have to take it. It’s the same for everybody. It’s not the greatest situation but I have been in worse.

“Dave is doing well. He is probably 99 per cent going to make it. John Ryan is going well, Stephen Archer is back. We are doing well enough there.”

Munster are two-time European Cup champions but they have finished third in their pool and failed to qualify for the knockout stages for the last two seasons.

However, Erasmus says that despite their recent defeat to Leinster and a heavy 27-7 loss in Paris on their last visit – against Stade Francais last season – he is not dwelling on the past.

“We try not to look back. We try to see this as a new season with new players and some new coaching staff involved and new opposition.