Pro12 and British based clubs in conflict 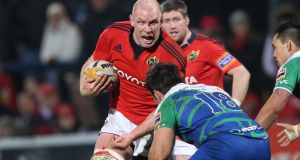 Paul O’Connell with ball in hand playing for Munster, who are supposed to meet Cardiff on the same weekend that the Welsh club are scheduled to play in the Anglo-Welsh Cup. Photograph: INPHO/Billy Stickland

Irish and Welsh rugby has been thrown into confusion and possibly stormy waters following the release of the LV =Cup Fixtures.

The opening round of the Anglo-Welsh Cup clashes with a round of the Pro12 league at the end of October with Welsh teams now scheduled to play in two competitions on the same day.

Pro12 officials, however, say they won’t change their match schedule.

Current fixtures show that Cardiff Blues and Llanelli Scarlets are due to meet in the LV=Cup at the Arms Park on the weekend of October 31-November 2, with the Dragons hosting holders Exeter and the Ospreys travelling to face Gloucester.

However, over that same weekend the four regions are also supposed to be playing matches in the Pro12 with Cardiff, Ospreys and Scarlets due to face Munster, Connacht and Zebre respectively, with the Dragons away to Ulster.

It remains unclear how the double booking could have occured but thePro12 are adamant there will be no refixing.

“The Pro12 fixtures will remain as they are on that weekend,” said an official in their Dublin office.

According the Walesonline the Rugby Football Union (RFU) said that the dates were agreed by all back in April. The RFU have issued the following statement:

“The WRU is currently in negotiations with the regions regarding the Participation Agreement for the upcoming season.

“Once those negotiations have concluded, they will address the potential clash for Welsh clubs in Round 1 of the LV= Cup, the dates of which were agreed by all LV= Cup stakeholders back in April 2014.”

*Lombardia and Emilia Romagna in Italy will provide the backdrop for the IRB Junior World Championship next year.

Championship: Browne and McClean on scoresheet as Idah sees red 19:04
Wicklow edge Division Four winner takes all clash with Wicklow 18:59
Kildare sign off league campaign with another impressive win 18:42
Armagh finish strong against Clare to return to top tier 18:30
Canter and McGowan pull away from the field at Italian Open 18:29
Here is your handy guide to sport on television this week