Munster trounce Treviso and give Erasmus a happy headache 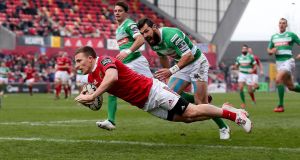 Munster’s Andrew Conway runs in for his second try of the game against Treviso. Photograph: Donall Farmer/INPHO

With Simon Zebo and Keith Earls shining for Ireland, Munster’s back three and replacements ran in five tries against Treviso to hand Rassie Erasmus a real selection headache with Europe just around the corner.

So when everyone is available and fit, what way will Erasmus fall: go with his experienced internationals or stick with those who have served him so well in recent weeks?

This was a well executed victory for Munster, who cut loose after being matched by Treviso for 20 minutes. Robin Copeland’s try then gave Munster a lead they continued to add to, with Conway and O’Mahony finishing off much of Tyler Bleyendaal’s good work. The efficiency of his team pleased Erasmus.

“I guess we’re always moaning about the rich clubs having all the money and all the players so when we for once get into a position with options to pick from, we must enjoy the moment and make the right selections and keep all the guys motivated,” said Erasmus. “Those who start, those who played off the bench, those who only take part in training during the week.

“At the end of the day, the 23 who run out there were supported by the guys not playing and training against them.

“It’s a nice headache to have. We’ll check tonight’s Irish performance and then we’ll have to make some tough decisions – which is a fortunate position to be in.”

With a scrum who completely dominated and a second-row partnership of Dave Foley and Darren O’Shea – who also scored a try – in rare form, Munster smothered their visitors.

A fifth win in a row pushed Munster a point clear of Leinster at the top of the Pro12 standings, and another win at Scotstoun this Friday against Glasgow will push confidence levels to another new peak.

“I’d be lying if I said we’re not mentally in a good place,” said Erasmus.

“I guess the trick will always be to enjoy it, get back on task, go back into the next game and try and execute a plan.

“You can enjoy this moment but then a win or a loss determines if you enjoy the week after. We are in a good place but we’re not going to be stupid – but we are where we want to be.”