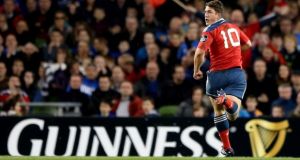 Rumours of Munster’s demise may have proved premature. Not entirely unexpectedly, the prospect of a visit to the Aviva against their auld enemies offered something of a reprieve from their Thomond travails, as well as getting their dander up. Even so, the scale of their improvement was one thing, the scale of this handsome beating over the champions was quite another.

Munster had lost on their last seven visits to the capital dating back to an 18-0 win at the RDS in September 2008 when in their pomp. Bossing the breakdown and much of the forward exchanges, where their setpieces were excellent, Munster simply looked like they wanted it more against their strangely subdued hosts.

Munster’s lineout again produced a steady stream of good ball from which they repeatedly went through the phases. Not only was their carrying harder and off repeatedly good depth and lines, but their commitment to the ruck, both in numbers and in execution, was more consistently intense.

In almost all sectors they had the game’s better performers. Their frontrow was more dominant against an injury hit Leinster pack, all three having good nights, with James Cronin their first try scorer and Duncan Casey again hitting all his darts until forced off.

Paul O’Connell was up for it, and Dave Foley followed him into the trenches, while CJ Stander had another fine all-round game of big carries and big plays, with Tommy O’Donnell also tackling his socks off.

Conor Murray complemented his sharp distribution by running hard around

the fringes, Ian Keatley played much closer to the gain line, and more effectively, and Denis Hurley gave the best evidence yet of why Anthony Foley believes he can be converted into an inside centre.

To Leinster’s credit, they stuck to their forlorn task with a second-half comeback after the respective bouts of replacements, albeit they were helped enormously by the rather bizarre sight of four Munster players being yellow carded.

This third defeat in five matches dropped the champions to sixth in the table.

Leinster were equally unsuccessful with what seemed an elaborate pre-match ruse. Word had surfaced during the day that neither Jack McGrath nor Rob Kearney (forced off in the second half against Cardiff a week earlier) would be starting, with the former not making the 22 and the latter on the bench. And so Brendan Macken was called into the starting line-up and Gordon D’Arcy shifting inside to 12 and the versatile Ian Madigan to fullback.

Michael Bent started at loosehead, with Edward Byrne joining his twin Bryan on the bench.

Contrary to the official selection the day before, according to Munster sources they were aware of this line-up yesterday - the clue being neither Byrne nor Macken featured in the Leinster A team earlier in the afternoon, against their Munster counterparts.

Yet Kearney ran the warm-up, his name was announced over the PR system before Madigan ran out with the number 15 jersey on his back as Matt O’Connor informed television viewers that Kearney’s back had seized up in the preamble.

Madigan quickly put Leinster in front with a scrum penalty, Keatley levelling after Dominic Ryan - who made a storming start - had lined up Stander with a big hit but was then offside. Ryan more than atoned when he followed up a big Munster scrum to knock Robin Copeland back on his heels, and another Leinster scrum enabled Madigan to restore their lead.

Munster’s response was impressive, a 40 metre, multi-phase drive off a lineout, with Stander and O’Donnell making big carries. Murray was eventually held up just short by Reddan, compensation coming by way of a scrum penalty which Keatley landed.

Munster were winning the gain line, and back they came with another controlled drive off a lineout five metres inside their own half. Keatley attacked the gain line and popped inside to Denis Hurley, who pierced the blue line and was given support by Dave Foley. He carried strongly again two phases later before Cronin took an excellent, hard out-and-in line to beat the tackle of Ross and stretch out left handed in contact with Rhys Ruddock for a fine finish.

Keatley partially atoned for missing the conversion with a 45-metre penalty off another big Munster shove, as their setpiece and breakdown supremacy became almost complete.

From another lineout, Munster went through the phases again, Keatley attacking the gain line again impressively, and the intensity of Munster’s close-range rumbles and clearing out ultimately led to their Wexford-born number eight Copeland burrowing over for Keatley to make it 21-6.

Leinster needed a break and received one when Simon Zebo was penalised for making negligible contact, if at all, with the airborne Jimmy Gopperth, and when Stander was rightly pinged for not releasing, Madigan landed the penalty.

Leinster went through the gears again, though were knocked back by O’Connell, Foley, Stander and co, and Keatley’s success on the gain line reached new levels when he picked off a delayed, deliberate inside pass by Gopperth intended for D’Arcy, to score an intercept try from halfway which he converted for a scarcely credible 28-9 half-time lead.

Keatley’s second-half restart went out on the full and an ensuing penalty from halfway was miscued, before he and Hurley combined to fix the Leinster defence with a nice strike move and Felix Jones, Zebo and Copeland all came within inches of a bonus point try and a 35-9 lead.

Instead, after a brief impact from Tadhg Furlong before he too joined Ross and their expanding frontrow casualties, with Fergus McFadden also due a scan on an ankle injury, Kearney was introduced for Madigan and D’Arcy to start exploring midfield space.

Damien Varley was binned for lazy running and when BJ Botha joined him for slowing ball down, Gopperth put Darragh Fanning through a depleted red line for the inevitable try. Yet, when Kearney was tackled by Gerhard van den Heever, Leinster were caught off guard for Hurley to win the penalty which Keatley landed for the 13-man visitors.

There followed a penalty try for Leinster when Dave Foley pulled down a lineout maul, and the lock was also binned for his troubles, but there was the encouraging sight for Munster of Peter O’Mahony claiming a lineout on his return and orchestrating a maul which was collapsed.

JJ Hanrahan eased them 11 points clear and, fittingly, their scrum had the final penalty and thus final say.