Munster boosted by return of Ireland trio for Ospreys game

Donnacha Ryan and Tommy O’Donnell both start in the pack, as fullback Felix Jones returns 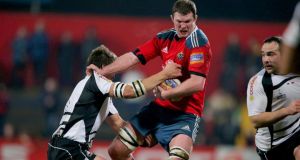 Donnacha Ryan will start in the Munster secondrow against the Ospreys in Swansea. Photograph: Billy Stickland/Inpho

Munster have been boosted by the return of Donnacha Ryan, Tommy O’Donnell and Felix Jones from Ireland camp and all three will start Sunday’s tough test away to the Ospreys at Liberty Stadium (4.0pm).

All three played in last weekend’s 36-8 victory over Zebre at Musgrave Park, although O’Donnell switches from openside to blindside flanker for the trip to Wales.

Casey Laulala and James Downey renew their midfield partnership, with Ian Keatley switching back to out half in place of JJ Hanrahan, while Andrew Conway comes in for Gerhard van den Heever on the right wing.

Dave Foley returns to partner Ryan in the secondrow, while Sean Dougall will take O’Donnell’s opeside slot to make his first start since injuring his ankle against Connacht in December. The final change sees James Coughlan captain the side from number eight.

Ruan Pienaar will start at outhalf for Ulster ’s trip to Italy to take on against Benetton Treviso on Sunday, with Ulster coach Mark Anscombe making three changes from the team that beat the Ospreys 10-7 a fortnight ago.

Pienaar is partnered at halfback by Paul Marshall, who makes his first Ulster start since December.

Luke Marshall returns to the side and joins Darren Cave in midfield, with Jared Payne moving to fullback.

The only change in the pack sees Ricky Lutton come in for John Afoa after the All Blacks tighthead returned to New Zealand due to a family bereavement.

Lewis Stevenson has has recovered from the neck injury that he sustained against Ospreys to start alongside Ulster skipper Johann Muller in the secondrow.

Connacht are also in Italy on Sunday and, like Ulster, have made three changes for the meeting with Zebre in Parma.

Darragh Leader is named at fullback while Dan Parks replaces an injured Craig Ronaldson at outhalf.

The only change in the pack comes with the inclusion of Academy forward Eoghan Masterson at openside flanker. it’s the 20-year-old’s second senior cap after making his debut at number eight against the Scarlets in November.