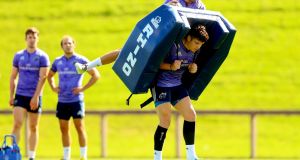 Alex Wootton carries Conor Murray on his back during Munster squad training at University of Limerick. Photograph: James Crombie/Inpho

The influence of new head coach Rassie Erasmus has had an immediate impact, and judging by the manner of their very Munsteresque smash-and-grab away win over the Scarlets last weekend, so too has the backroom team of assistants which he has assembled.

In playing the conditions better, Munster demonstrated many of their old virtues, which Erasmus has vowed to build upon.

In winning with just 40 per cent of the possession and the territory, the squad’s voracious appetite in defence demonstrated clear signs of the way the Munster players have bought into the methods of new defence coach Jacques Nienaber – witness the side making 169 tackles to the Scarlets’ 91.

Granted, it wasn’t perfect – witness also the 24 missed tackles – but they still limited the line breaks to six and generally had another would-be tackler in close proximity to limit the damage; plus, they scrambled well.

While still bearing the title of head coach, Anthony Foley has been given responsibility for Munster’s breakdown work, and their sharpness in this area was particularly striking in the build-up to James Cronin’s try, as well as Ronan O’Mahony’s opportunist pick-and-go try.

The word on Felix Jones’ promotion to technical coach has also been very positive, and in time they will need to bring a sharper attacking edge to their game.

That said, the five from six return from kickers Tyler Bleyendaal and Ian Keatley was as vital as any aspect of their game in keeping the scoreboard nicely ticking over.

How last season might have panned out differently for Munster had that been a more regular occurrence in important matches.

On the down side, the province’s cutting edge has been blunted by the loss of their leading try-scorer Simon Zebo for five weeks with a fractured rib, seemingly sustained in the act of brilliantly saving a try last week. In his stead, Andrew Conway starts at fullback and the only other change sees Keatley start instead of Bleyendaal, who has been ruled out with “a mild calf strain”.

Their bench sees the return of last season’s IRUPA player of the year CJ Stander, as well as hooker Duncan Casey and academy fullback Stephen Fitzgerald, who are all in line to make their first Pro12 appearances of the season.

Casey spent much of last season rehabbing a pectoral tear and is in line to make his first competitive appearance since November of last year, and Stander’s introduction should be a fillip for home team and crowd alike.

Furthermore, Wales captain Sam Warburton, Josh Turnbull and Lloyd Williams are in line for their first appearances of the season after being named among a strong-looking bench.

Wilson has described this game as “a huge challenge” for his team.

“Munster showed how clinical they are playing their game against the Scarlets,” he said. “They play a very abrasive, confrontational style both in attack and defence, there’s a lot around their set-piece and it is effective for them.

“We feel we have an approach which will suit the opposition we are playing but ultimately it’s about us being able to execute that against a good, pressure defence.

“We took them really close last season. We had a decent day, played some expansive rugby and tested them but came away with a narrow loss and learnt lessons from that,” he said of last season’s 35-27 defeat here.

In what has traditionally been a high-scoring affair, Cardiff’s ensuing 37-28 victory at home last season ended a run of five successive defeats to Munster, but the Welsh team do have an impressive record in Cork, being the only away side to have won there in the league three times (something they also achieved, uniquely, in the European Cup).

Historically Munster have always been strong starters having lost just once in the opening two rounds since 2009, and have lost only one of their last 14 matches in Cork.

Even so, the bookies odds do not reflect how Cardiff were the form Welsh side in the second half of last season.

Bolstered by the strengthening of their squad during the off-season, last week’s bonus-point win at home to Edinburgh was their 11th win in their last 15 league matches. They look very dangerous.