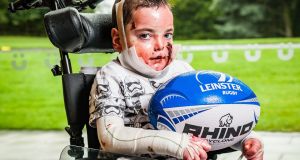 The late Liam Hagan (8) had been selected as a Leinster Rugby mascot for the upcoming RaboDirect Pro 12 game against Connacht. File photograph: Brian Reilly-Troy

Leinster players and supporters will this Saturday pay tribute to the team’s “bravest little fan” Liam Hagan, who died of a skin condition just weeks before he was to lead the side out for the weekend game against Connacht.

A long-time fan of the provincial team, Hagan (8), from Threemilehouse in Monaghan, suffered from EB (epidermolysis bullosa) - a genetic disease which causes blistering of the skin at the slightest touch.

He had been selected as a mascot for the upcoming RaboDirect Pro 12 game at the RDS, and Leinster has decided to dedicate the game to his memory.

Hagan was said to have been overjoyed when he was picked for the honour, and his cousin and best friend Adam McCormic will now lead the teams onto the field in his stead.

The young fan’s selection as a mascot came about through Leinster Rugby’s partnership with Debra Ireland, which provides services for those living with EB and supports research into the illness.

The charity is encouraging fans to wear a temporary tattoo of its butterfly logo in solidarity with those who live with the chronic condition.

“Saturday is still Liam’s day and we are asking people all over the country to wear a butterfly temporary tattoo for him and all families fighting the battle with EB,” said Debra spokeswoman Judith Gilsenan.

“Joining in this celebration of Liam’s life and his unbelievable bravery would mean the world to his family,” she added.

As part of its coverage of the match, Sky Sports cameras will scan the crowd for those wearing the butterfly tattoo, and one winner will receive two Leinster season tickets.

“Liam is the toughest little guy we have ever come across and it is very sad that he won’t be with us on Saturday - but we will make sure that [his cousin] Adam has a great day and we will remember Liam,” said blues forward Seán O’Brien, who encouraged fans to support Debra Ireland’s work.

The charity has embarked on its awareness week for EB, and anyone looking to donate can do so by texting BUTTERFLY to 50300, with €3.25 from the €4 charge going directly to Debra Ireland.

3 The Offload: Ireland women must be allowed to move with the times

Ireland release 13 players for interprovincial clashes 13:38
Former Barcelona president Bartomeu arrested after club offices raided 12:41
Echoes of Berlin 1936 . . . Should Beijing Winter Olympics be boycotted? 10:01
The Offload: Ireland women must be allowed to move with the times 10:00
Tiger Woods touched by red and black tribute by fellow players 08:52
Here is your handy guide to sport on television this week