Kearney and Strauss reflect on missing out 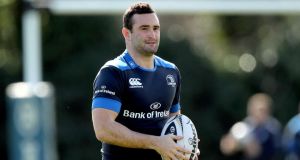 A conflict of emotion is understandable. Richardt Strauss and Dave Kearney were enthusiastic couch-bound supporters, delighting in Ireland’s 40-10 Six Nations Championship-clinching victory over Scotland in Edinburgh, but bubbling just beneath that surface happiness was an unrequited desire: they wanted to share the triumph as players.

Both had been perennial attendees at the Ireland training camps during the tournament, while Strauss had on occasion been part of the pre-match game-day build-up as 24th man. Injury had denied both men a proper run at contending for places.

Kearney, a standout in Ireland’s 2014 Six Nations success, cheered on his friends, team-mates and brother Rob from Dublin, but the acute sense of missing out was difficult to shake off.

“I pretty much didn’t leave my couch for the day,” he said. “It was a pretty amazing day. It was a great outcome at the end to see the lads win the competition. It was very tough, to be honest. I’m not going to lie about it.

“To be involved in winning the competition last year, I know what that feeling is like . . . At the same time, I’m delighted for the lads and it’s great again for Irish rugby in a big year.”

“It spoiled the weekend,” he said. “The missus took the dog out and then got back to the car, and the windows were smashed out and the handbag stolen, so I had to calm her down and go through all the process.”

Friday night’s Guinness Pro12 game at the RDS against league leaders Glasgow Warriors is a vital match for Leinster. Both Strauss and Kearney desperately want to be involved because it would give them first tilt at a jersey they’ll want to retain the following week for the Champions Cup quarter-final against Bath at the Aviva Stadium.

“We are out of the top four and that just means the last five [league] games of the season are going to be really important for us,” said Strauss.

Leinster coach Matt O’Connor will review the fitness of players returning from Ireland duty, but expects that the majority, if not all, of those players who started on the bench in Edinburgh – Sean Cronin, Jack McGrath, Marty Moore, Jordi Murphy, Eoin Reddan and Ian Madigan – will play some part.

Connacht’s Jake Heenan picked up a rotator cuff tear against the Cardiff Blues, meaning he won’t play again this season. Willie Faloon suffered a dislocated shoulder in training and requires surgery, which rules him out for the remainder of the campaign. Pat Lam will be without the pair, plus wing Niyi Adeolokun (leg), centres Dave McSharry (knee) and Bundee Aki (ankle) and prop Nathan White (back) for Saturday’s trip to Munster, but scrumhalf Kieran Marmion and number eight Eoin McKeon are available.