Denis Hurley, Jack O’Donoghue and Ronan O’Mahony get the tries at Musgrave Park 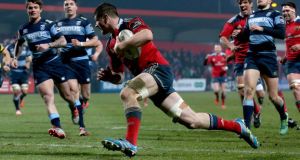 Munster made the best possible start at a revamped Musgrave Park as they saw off the challenge of Cardiff Blues at the Cork venue.

JJ Hanrahan was the star with an 18-point haul as his side went top of the Guinness Pro 12.

Second-half tries from Denis Hurley, Jack O’Donoghue and Ronan O’Mahony drove home the advantage for Munster with Josh Navidi dotting down for the opposition.

The teams were level 9-9 at the break but the signs were there in the first 40 minutes and the hosts broke Cardiff’s resistance with some inspired attacking play after the break.

Hanrahan missed with his first kick of the night but from there on was exemplary from the tee.

He notched his second to give Munster a 3-0 lead in the 11th minute but Cardiff outhalf Rhys Patchell kicked three-in-a-row to give them a 9-3 lead with nine minutes left in the half.

Hanrahan was lighting the game up and he almost sent Luke O’Dea through with a smart inside ball.

But when Cardiff No 8 Manoa Vosawai strayed offside Munster were back within three and Hanrahan made it 9-9 at half-time with his third kick from four attempts in the 39th minute.

Munster started strong after the break and it wasn’t long before O’Donoghue who was making his first Pro 12 start broke with first-time captain Hurley on the end to profit to make it 14-9 with Hanrahan converting.

Cardiff began to crumble and O’Donoghue got a much deserved try on the hour before Navidi crossed over the tackle of Darren Sweetnam and Munster looked nervy.

However Anthony Foley’s men held on and Hanrahan slotted another penalty before O’Mahony touched down for a try in the final minute to round of a fine display.