Connacht make eight changes for their Pro12 clash against Cardiff 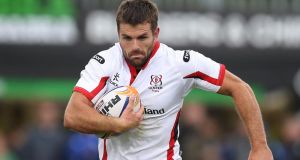 Ulster have made 10 changes to the side that lost away to Zebre last weekend for Friday night’s Guinness Pro12 home game against Edinburgh at Ravenhill (7.35pm).

Jared Payne has recovered from a hip injury that has kept him out since the opening league game of the season and comes in at outside centre to join Stuart McCloskey, with Darren Cave moving to the bench.

Louis Ludik takes over from Craig Gilroy at fullback, with Andrew Trimble coming in on the right wing and Tommy Bowe shifting to the left.

Paddy Jackson will have a new halfback partner with Paul Marshall retuning in place of Michael Heaney.

There are six changes to the pack, including a new frontrow of Ruaidhri Murphy, who makes his competitive debut, skipper Rory Best and Wiehahn Herbst, who replaces Declan Fitzpatrick after his red card in Italy.

Academy lock Alan O’Connor will make his first competitive start for the province alongside Franco van der Merwe, while there are two changes in the backrow with Robbie Diack coming in at blindside to allow Roger Wilson to shift back to number eight and Ireland international Chris Henry returning at blindside ahead of Clive Ross.

Connacht have also made widespread changes from last weekend’s first league defeat away to Glasgow for the home game against Cardiff at the Showgrounds (7.35pm).

In all there are eight change, including the return of Ireland international scrumhalf Kieran Marmion in place of Ian Porter. The other two changes in the backline see Niyi Adeolokun return on the right wing and Danie Poolman shifting to the left wing for the injured Matt Healy, while Craig Ronaldson replaces Dave McSharry at inside centre.

There are two new props in the shape of Ronan Loughney and Nathan White, who take over from Denis Buckley and Rodney Ah You, while the secondrow is also changed with Mick Kearney and Quinn Roux taking over from Michael Swift and Aly Muldowney.

The final change comes in the backrow where Willie Faloon takes over from Eoin McKeon at openside.