Impressive Connacht sustain momentum to stay at top of Pro12 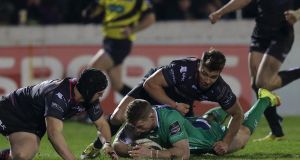 Connacht took a pivotal victory in the Guinness Pro 12 to maintain their momentum at the top of the table.

In a high-octane fixture at the Galway Sportsgroun, Pat Lam’s squad saw off the Ospreys with three tries, closing out the game to prevent the Welsh heading home with a bonus point.

Connacht held a slender 17-15 lead at the break, having produced the perfect start. They went 14-3 up after 10 minutes with tries from Bundee Aki and Aj MacGinty, with centre Craig Ronanaldson adding the conversions, while the Ospreys’ outhalf Sam Davies struck a fourth-minute penalty. Benefitting at the breakdown and a series of penalties, the Welsh side struck with a try from Ben John and then took the lead for the only time in the contest when the immense No 8 Dan Baker powered over from another penalty, with Davies adding the extras.

Ronaldson edged the home side in front with a 27th minute penalty, and when they took control in in the second half, Connacht stretched the lead to 24 - 15 when top try scorer Matt Healy bagged his ninth of the Pro 12, spinning out of a tackle, to power through from close range.

In an end-to-end match the Swansea outfit never relented, striking soon after when Welsh scrumhalf Rhys Webb finished off a superb attack from halfway, and Davies converted to reduce the deficit to just two points.

Connacht’s riposte was a Ronaldson three-pointer when Denis Buckley forced the penalty at the breakdown. Thereafter the Ospreys piled on the pressure. A try-saving tackle from replacement Kieran Marmion stopped Davies in the corner before Connacht put the game beyond reach with Ronaldson’s third penalty in the 66th minute.