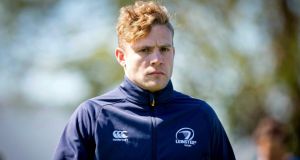 Ian Madigan has been dropped for Leinster’s must win Pro 12 game against Ulster at Ravenhill. Photograph: Inpho

In what could be seen as a boost to Gordon D’Arcy’s hopes of making Ireland’s World Cup squad,  Leinster coach Matt O’Connor has taken the decision to drop Ian Madigan.

It’s one of four changes made by O’Connor ahead of Friday’s win or bust Pro 12 game against an unchanged Ulster in Belfast.

The Australian immediately hauled Madigan off the Stade Vélodrome pitch last Sunday after he threw the pass that Bryan Habana intercepted to race clear for the decisive score in the Champions Cup semi-final. Leigh Halpenny’s conversion made it 25-15. It finished 25-20 after Jimmy Gopperth failed to convert Sean O’Brien’s 95th minute try.

Madigan did show a steely nerve to land five from six penalty attempts but he also put three balls out on the full, including the kick-off.

Gopperth, who joins Wasps this summer, will take over the place kicking.

O’Connor stressed this week that Madigan is not suffering from game management problems, a flaw in his game previously identified by Ireland coach Joe Schmidt.

“He’s got to be better moving forward. He’s got to get back on the horse and be as good as he can as quick as he can.

“It’s probably not a game-management issue in its purest form,” added O’Connor of Madigan’s intercept pass to Habana. “It’s more of a training and a decision-making scenario.”

As expected, Zane Kirchner comes onto the right wing ahead of Fergus McFadden, who underwent a thumb operation on Wednesday, with the pack freshened up by Dominic Ryan and Richardt Strauss.

“A keyhole procedure will take place next Monday morning for a laberal repair to his left shoulder which will keep him sidelined for 12 weeks,” read a Leinster statement.

Darragh Fanning provides three quarter cover as Dave Kearney has a hip flexor strain but the Ireland winger is expected to be available for the Treviso game at the RDS on May 8th.

Darren Cave has sufficiently recovered from a hamstring problem to play in direct opposition to D’Arcy. This pair appear to be tussling for the same spot in Schmidt’s Ireland squad. Cave, who has eight tries this season mostly from outside centre, was retained in the Six Nations panel last month when D’Arcy was released.