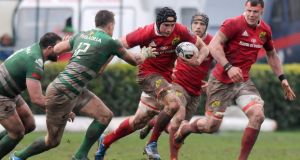 Ian Keatley kicked Munster to a deserved and hard fought victory in northern Italy, but there is still plenty to work on for Anthony Foley and his backroom team as they look to turn around their season.

It was always likely to be a dogfight at the Stadio Monigo following days of torrential rain and with a strong wind causing the players all sorts of problems. And as it transpired, the conditions led to a tactical, kicking battle of wits between the home side’s fullback Jayden Hayward and Munster outhalf Keatley.

Munster made a bright start with Robin Copeland carrying well early on and the visitors fashioned the first real chance moments later following Mike Sherry’s foray forward. From the recycle, Keatley’s pass was slightly behind Jack O’Donoghue, allowing the Treviso secondrow Filo Paulo to tackle him into touch.

But Munster did not have long to wait to break the deadlock. Francis Saili’s eye for a gap saw him exploit space wide out before delivering a perfect scoring pass for Gerhard van den Heever to scoot over after 11 minutes.

Keatley was unable to add the extras, and Treviso hit back almost immediately to take the lead. Alberto Sgarbi and Ludovico Nitoglia both went close, softening up the Munster defence, and the resistance was eventually broken on 26 minutes. Having repelled a number of drives from the Treviso pack, Munster’s thin red line was breached when number eight Robert Barbieri powered over from close range.

Hayward slotted over the conversion and the home side held on to their lead until half-time. Indeed, they almost extended it immediately after the restart, and again Keatley and Hayward were central figures.

A miscue from the former Connacht number 10 gifted possession to Hayward and it initially appeared the New Zealand-born fullback had won the footrace to score in the corner. However, after consulting with the TMO referee Ian Davies ruled the try out with the television images showing Keatley had just about got his hand to the ball before Hayward.

The Treviso man did extend his side’s advantage 12 minutes later with a penalty awarded for offside. It was 10-10 within six minutes when centre Saili chased down fullback Andrew Conway’s kick to touch down, although Keatley was again unsuccessful with his conversion attempt. Hayward and Keatley traded penalties to leave the score at 13-13 with 12 minutes remaining before the Munster man added a second five minutes from time.

Alarm bells were ringing when the visitors had prop Dave Kilcoyne yellow-carded with three minutes left on the clock, but they managed to hang on for victory.