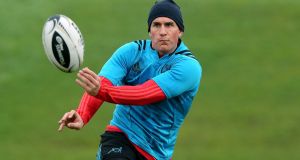 Ian Keatley admits he has been overthinking his place-kicking for Munster. Donall Farmer/Inpho

Munster outhalf Ian Keatley said that it is not easy to move from one province and play for another but he expects Robbie Henshaw to take it in his stride.

Dubliner Keatley also made the breakthrough with Connacht, where he spent three seasons.

The 28-year old is now in his fifth season with Munster and said he appreciates how difficult the decision can be to move to a rival province.

“Of course it’s difficult, you’ve been on the pitch with these guys. They’ve become your friends, you’ve played matches together, you’ve been through wars together. Robbie’s decision to leave, I’m sure it wasn’t an easy one.It’s disappointing news for Connacht. But it’s great for Leinster to have such a great player.

“I think that’s the way the game is going. If you look at all the signings that the French clubs are making and the English clubs, the four provinces need to stay with them.”

Keatley is concentrating on trying to get Munster’s campaign back on track tomorrow when they travel to play champions Glasgow Warriors at Kilmarnock FC’s stadium, the appropriately named Rugby Park, which has a 4G surface.

Keatley is hoping to deliver from the tee after an indifferent campaign with the boot. “I’m out there working hard on it. Sometimes you ending up thinking so much about it . . . I’ve driven myself nuts sometimes overthinking it but I’m still sticking to my principles and just keeping working hard trying to tweak one or two things.

“I get frustrated as well. I’m not trying to miss any or anything like that and I just want to do what’s best for the team, and if I can get my kicks it does go a long way toward helping the team,” said the four-times capped Ireland international.

Assistant coach Ian Costello said they would freshen up the side and was glad to have James Cronin, Tommy O’Donnell and Donnacha Ryan released from Six Nations duty.

“To have them this weekend has definitely added another dimension to the group, especially with such a short turnaround,” he said.