Foley looking for a top-class replacement for O’Connell 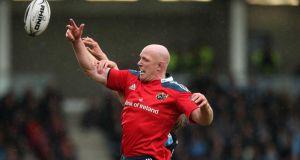 Paul O’Connell battling for possession during his final outing for Munster in the PRO12 final defeat to Glasgow at the Kingspan Stadium, Belfast. Photo: Ryan Byrne/Inpho 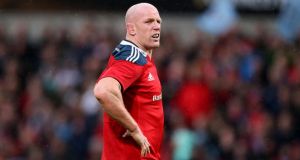 To that end Anthony Foley said that the province have some elbow room in possibly signing a lock from overseas given BJ Botha is on a short-term contract extension and CJ Stander also completes his three years’ residency at the end of the World Cup.

“There is room there to wriggle around that. So we just have to ask the question around. I don’t think this has ever happened before so it’s something that’s a question we probably need to ask.”

“Yea, I think when we get to that situation we will probably have to go to the market.

“Then again we have the likes of Dave Foley, Billy Holland Donnacha Ryan. You still have Donncha O’Calllaghan. You’ve Sean McCarthy, John Madigan coming through so we have players we’ve earmarked for progression but in the competitions that we play in you need top players as well and Paul O’Connell is a top player.

“You’d like to believe that if you lose him you need to replace him. When I worked with Ireland a season or two ago, when he got injured, Donnacha Ryan stepped in and did a very good job at international rugby so there’s no question that Donnacha Ryan can do a job for Munster . . .”

Reflecting on the season overall, Foley said: “I think we changed our game from where it was last year we went back to what we felt was more suited to the players. It took us a while to get to grips with that. Obviously there were disruptions during the year. I think by the end of it when we got momentum post-European Cup campaign and we got some momentum during the Six Nations and post Six Nations, I think we saw what we were capable of going to.

“During that time obviously there were fellas that emerged with genuine cases to start for Munster. That has brought in good selection headaches and hopefully we can build on that through the summer.”

But looking ahead to next season, Saturday’s 31-13 Guinness Pro12 final defeat to Glasgow highlighted the team’s need to perform better in big games. “You look at the Saracens game over there, you look at the Clermont game at home and the final here, we need to manage the big games better.”

Meanwhile the French Federation yesterday confirmed that Guy Noves will take over from Philippe Saint-Andre as the next head coach of France after the World Cup. Noves has been coach of Toulouse since 1993, during which time they have won ten French titles and four European Cups.

1 Royal Portrush: Golf clubs ‘in real distress’ as eyes turn to 2021
2 Rodgers shunned by some family members for leaving Celtic
3 Colin Kaepernick’s exile is too fresh for NFL to speak out on US protests
4 Connell losing touch with club championship is real tragedy of Normal People
5 Ger Loughnane and the spark that lit Clare’s hurling revolution
Real news has value SUBSCRIBE