Foley hopes O’Connell will carry on playing after World Cup 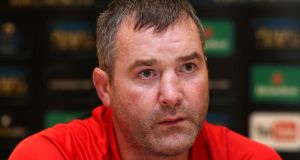 Munster rugby coach Anthony Foley: “Paul is contracted to June next season. I always get confused as to why we’re talking about a fella that’s under contract. ” Photograph: Cathal Noonan/Inpho

Paul O’Connell will carry on playing after the World Cup and hinted he would try to persuade the Irish captain to continue at least until the end of his contract in June 2016.

“Yea, but everything like that will be in private and go on behind closed doors,” said Foley, after Munster trained in Thomond Park yesterday.

Still irritated by reports Toulon are interested in signing him, Foley added: “I would have spoken to Paul about five times over the last eight days, but all of them were around preparation for the game [Munster v Ulster in Belfast, Saturday]. There hasn’t been one conversation around personal decisions that he may have to make.

“I think he could continue for at least another year and go on, but it’s really himself that feels that: he knows his body better than anyone else, so it’s up to him.”

Shels chairman Andrew Doyle hits out at ‘appalling’ FAI governance 20:39
David Silva set to join Lazio after leaving Man City 20:38
Spurs complete signing of Pierre-Emile Hojbjerg 19:27
Linfield could get bye after opponents placed in quarantine 19:19
Champions League feast awaits but no party time in Lisbon 18:44
Here is your handy guide to sport on television this week