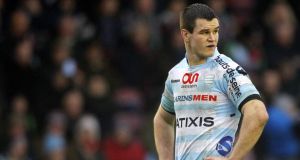 Johnny Sexton’s mooted return from France to play for Leinster next season has been welcomed even by rival provinces. Photograph: Alan Crowhurst/Getty Images

The great and the good of Celtic and Italian rugby assembled for the launch of the Guinness Pro12 yesterday, ironically in Londo,n at Diageo’s HQ in Park Royal, where the League’s CEO John Feehan referenced the 227 internationals from 14 countries who are registered for the forthcoming campaign.

The prospect of that contingent being supplemented next season by the prodigal return of Lions outhalf Johnny Sexton, also sent a frisson through proceedings.

Accepting the prospect of Sexton returning from next season was good for Irish rugby, the league itself and specifically Leinster, their coach Matt O’Connor said:

“If that happens, fingers crossed, it’s a huge statement.”

O’Connor reckoned he could inherit a better player than the one who departed over a year ago: “He’s world class. The Lions tour was probably the pinnacle of his powers. He’s undoubtedly developed his game in France. It’s probably a little bit of a development for him in the sense of his approach to how you can play the game and wherever he ends up next contract he’ll get incredible growth out of that time in Paris.

Even without him Leinster retained their status as top Celtic dogs last season and have accumulated four major trophies since Munster won the last of their three League titles in 2011, and Anthony Foley admitted if more Munster players are going to break into an Ireland squad and team in which Leinster are bulk suppliers then “we’ve got to win those tournaments. That’s the bottom line”.

Yet he welcomed the enhanced Leinster firepower that would come with Sexton’s return: “I think it’s brilliant. If he wanted to come back and live in Listowel we’d accommodate him as well,” quipped the Munster coach.

“You want to control your best and he’s one of the best players Ireland have at the moment. It’s having him under the guidelines of the IRFU and having the control and being able to manage his welfare is paramount going into the World Cup. If you want a successful World Cup you need to look after your best players.”

Similarly, Ulster captain Rory Best said: “It would be a great boost for the Pro12, the club, and Ireland in general. You want your best players here. To have world class players playing in this league, then the better it is going to get.”

Best did add with a smile: “It might be a pain in the arse for the rest of us, but that is the way it goes.”

Best also admitted going down to Dublin and winning in the RDS had eclipsed winning in Thomond Park as the ultimate challenge in interprovincial rugby.

On the eve of the 2014-15 Pro12 season, featuring new title sponsors, a new main broadcaster in Sky Sports, along with a more meritocratic qualification for the European Cup, Leinster are favourites to become the first club to win three successive titles.

Pat Lam also confirmed Mils Muliaina arrived in Galway yesterday, although because of a shoulder injury the former New Zealand fullback will not play until the end of October, as with ex-Chiefs centre Bundee Aki and ex-Blues hooker Tom McCartney due to ITM Cup duties.

“Mils has gone straight into our leadership group,” said Lam, who forecast Muliaina could have the same influence on Connacht as Brad Thorn and Isa Nacewa in Leinster by providing badly needed leadership out wide. And I still believe he can play at the top level.

“His whole role is not to be the saviour. He has a wider brief around what he can contribute. Ultimately, Connacht is an integral part of Irish rugby and it’s on a high at the moment.

“The IRFU have put a lot of resources into Connacht, this time I have three assistant coaches whereas last year I had only one.

“We have the facilities and the staff. That’s why they signed Mils off. They know the investment is worth it in terms of what he can do for our young Irish players.”