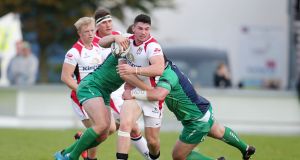 Sam Arnold has been named at outside centre for Ulster’s clash with Cardiff Blues. Photograph: Darren Kidd/Inpho/Presseye

Four games in and Ulster’s record already has a familiar feel to it.

Two hefty home wins and the same number of defeats on the road have done some unsettling damage to the province’s ambitions.

Hardly an ideal-looking situation for soon-to-start director of rugby Les Kiss and after last weekend’s rather lame defeat at Edinburgh, the plan is to get things back on track with a hopefully hefty result back at fortress Kingspan against Cardiff Blues.

No better time then for fifth-placed Ulster to include Darren Cave and Paddy Jackson in the squad after their return from what wasn’t exactly a memorable World Cup campaign, in terms of their collective game-time as well as the fact that both are now back home.

Head coach Neil Doak has deployed both on the bench for tonight with just two alterations having been made to the starting side courtesy of outhalf Ian Humphreys – who came off the bench in Edinburgh after being injured in pre-season – getting his first start of the campaign, while secondrow Lewis Stevenson is included off due to Dan Tuohy’s concussion.

This should really be another home banker with the added footnote that, if Ulster avoid tripping up, it will be 14 games without a league defeat in Belfast which will equal their best unbeaten run at home in the PRO12.