Conor Murray galvanised by fear of failure in Pro12 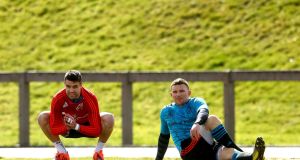 A lot happened in Munster while Conor Murray and his Ireland colleagues were on Six Nations duty. Former England assistant coach Andy Farrell came and went, Anthony Foley decided to stay for another season, and the inconsistency that has dogged Munster all season surfaced again as they won three and lost three games in the Pro12.

Oh, and one of his Munster team-mates said he can’t ever see the day when Murray and the rest of the Ireland lads will beat the All Blacks.

Murray won’t be paying too much heed to Francis Saili’s comments just now, but did admit he and a few of the other Irish boys might just be tempted to ask their twice-capped All Black colleague to put a wager down ahead of the two Tests later this year. “We might have to after this,” said Murray.

“I’m sure he said it to get a rise. He’s a proud Kiwi and he’s always going to say that. Looking further down the track at the November internationals coming up, it’s hugely exciting. Last time I came up against the All Blacks, and a number of my international colleagues played then, we came very, very close.

“It’s a long way off but it’s hugely exciting. It’s very rare to play over in Soldier Field [in Chicago] and it’s a squad everyone wants to be involved in, so it starts with playing well with your province.”

There is, of course, the three games in South Africa where Ireland have never won against the Springboks to look forward to as well, but right now the prime focus for Murray is Leinster this weekend.

“It hasn’t been spoken about but we are all smart enough to know that we all want to play in the best competition, do I don’t think you need to ask many players. I think everyone is aware of where we stand and what we need to do.

“We are flirting with the top four and the top six is very tight also. These games are huge even looking towards next season. Qualifying for Europe is massive for this club and we are under no illusions. We need to perform well for the rest of this season to look forward to next season.

“It’s a huge, huge game and I’m sure they will be saying the same. We want to stay in the top four, we want to be involved in playoff rugby,” added Murray.

A win on Saturday won’t see Munster over the line in either of their quests but a loss could put a big dent in their Pro12 hopes. Still, Murray believes the fire is back in their bellies at just the right time.

“Our season hasn’t gone quite to plan so there is probably a bit of frustration in our group to go up there and play with our hearts and hopefully with a bit more passion than we have this year.”