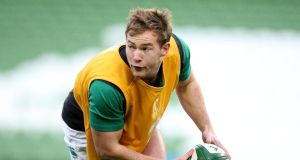 Connacht face another benchmarking test of their development this season as they host the Scarlets, opponents against whom they last won over three years ago.

The Welsh side are coming off an excellent 19-9 victory over last year’s beaten finalists, Glasgow and despite being without nine players on international duty, coach Wayne Pivac is happy with the way the team has pulled together in the absence of frontline players.

“The guys that have been doing the role over the last few weeks have done well in poor conditions and we’ve got some very good results. I’m pleased with how the squad’s been going.”

The New Zealander has never been to the Sportsground before but has been fully appraised of the often challenging weather conditions.

Jason Harris-Wright’s unfortunate injury means hooker Tom Cartney, who made his Connacht debut off the bench last week, is named in the run-on team. Marmion’s return and Jack Carty’s continuing run of having played in every game this season, provides the home side with a running threat at halfback.

Andrew Browne is named alongside Quinn Roux in the secondrow while Eoin McKeon joins the backrow. Ostensibly a number eight in his age-grade days, he’s adapted superbly to the role of openside flanker, largely based on his athleticism and core skills.

Mils Muliaina just needs to play matches after a prolonged spell on the sideline and his experience and ability should become more apparent with every passing game. Bundee Aki and Dave McSharry form a hard-running midfield while Matt Healy gives the home side real pace out wide. Leader is among the replacements.

Lam admitted: “Scarlets are a well-coached side with huge squad depth. Their win last week over an in-form Glasgow Warriors highlights the big challenge we face but with both teams vying to climb the table, it is set up for a great evening.”

The teams are separated by a single point in the table. The Scarlets dominance of this fixture since September 2011 could be about to change. This vintage are more robust to handle a tough remit.