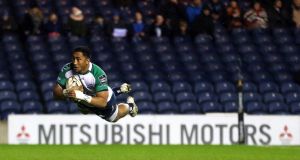 Bundee Akee goes airborne as he scores a try in Connacht’s victory over Ediinburgh at Murrayfield. Photograph: Russell Cheyne/Inpho

Connacht showed why they have reached such stratospheric heights in the Guinness Pro 12 this season by extending their unbroken sequence of wins in the league to five with a full deserved bonus-point victory over Edinburgh at Murrayfield on Friday night.

The result puts Pat Lam’s side six points clear of Leinster at the top of the table, although Leo Cullen’s side do have two games in hand.

Connacht bossed the forward exchanges, had the tighter defence and played some delightful attacking rugby behind the scrum where AJ MacGinty controlled matters expertly and benefitted from the crisp service supplied by Kieran Marmion.

Connacht looked lively in the opening exchanges as scrumhalf Marmion probed the Edinburgh defence with a clever loop run in midfield, the move resulting in a penalty only for Craig Ronaldson’s kick to hit the upright.

Edinburgh were soon under further pressure after a series of drives by Connacht, the ball was released to Bundee Aki whose expertly times pass gave MacGinty his side’s opening try, Ronaldson adding the conversion.

Connacht continued to dominate the game and were unlucky not to add a second try after wing Danie Poolman appeared to have scored in the corner. The television replay however showed that the wing had put a foot in touch just before grounding the ball.

The referee, however, had been alerted to an earlier Edinburgh infringement, resulting in a penalty for Connacht and 10 minutes in the sin-bin for the home side’s Anton Bresler for collapsing the maul. Connacht opted for the touchline before setting up a lethal driving maul and a try for flanker Jake Heenan, Ronaldson again converting.

Edinburgh had a chance to put points on the board but a missed shot at goal by Sam Hidalgo-Clyne left the capital side trailing 14-0 at the break. Three minutes into the second half the home side made amends with an unconverted try in the corner by centre Chris Dean, facilitated by the absence of the yellow-carded Tiernan O’Halloran.

But any worries about an Edinburgh fightback were quickly dispelled after Aki went through the Edinburgh defence as though he was an untouchable to bag Connacht’s third try, the trusty Ronaldson providing the extras.

Edinburgh hit back with a try in the corner by their young winger Damien Hoyland this time converted by Hidalgo-Clyne. Then after another attack inspired by Hoyland, Edinburgh’s number eight Cornell Du Preez barged over in the left hand corner. Sadly for Edinburgh, Hidalgo-Clyne’s conversion attempt rebounded off the post.

The Edinburgh scrumhalf was on target with a 68th-minute penalty that reduced Connacht’s lead to just one point. But the home side’s hopes of staging a late fightback suffered a set-back when replacement Eoin McKeon scored under the posts from a scrum pick-up for the bonus point, this time MacGinty kicking the conversion.

Then on full-time Edinburgh were awarded a penalty goal, Hidalgo-Clyne’s successful kick allowing the Scottish Capital side to take a bonus point from a game which on the night belonged to Connacht.