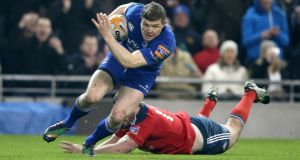 Leinster’s Brian O’Driscoll goes over for the game’s only try against Munster in the RaboDirect Pro 12 clash at the Aviva Stadium. Photograph: Dan Sheridan/Inpho

Leinster 22 Munster 18: The story? Brian O’Driscoll of course. When has it not been? A flash of brilliance on the last lap of his long goodbye should have been the tale of tonight but instead it was what looked a recurring calf injury that puts his rematch with Mathieu Bastareaud in grave doubt.

Leinster coach Matt O’Connor mentioned a stiff neck as being the centre’s main problem after the game, but the next 48 hours will tell how the great one came out of a brutal physical contest at the Aviva.

Munster put themselves in a position to do Leinster twice in the one season for the first time in ages but O’Driscoll’s try and the boot of Ian Madigan denied Ian Keatley’s flawless kicking its just reward.

It was easy to forget that this was an important Pro 12 encounter, not just a precursor to Europe, and an engaging occasion all on its own.

Leinster reported no major injuries at the start of last week but come tonight they were down four props. Munster were seemingly at the same codology with Peter O’Mahony’s hamstring.

After doing the coin toss with Jamie Heaslip, the Munster captain twinged the hamstring that ruled him out of the Italy game and saw him pulled off in Paris.

Michael Bent was parachuted into the Ireland rugby team in November 2012 against the Springboks as a tighthead prop (back when there was a genuine shortage). The Kiwi is seen as a loosehead nowadays.

Not the most effective one though. Ed Byrne made the bench last night and while it was a little premature, keep an eye out for him (and his hooker twin Bryan who is tearing up trees for Clontarf in the AIL).

Carl Hayman, perhaps the greatest New Zealand tighthead of them all, could make mince meat of Bent if given the opportunity in Toulon next Sunday.

Cian Healy’s ankle has been patched up these past few months and must be once again. They’ll also probably need Jack McGrath to make it back.

As was always a possibility with Healy and McGrath crocked, Munster’s scrum dominance was the initial difference between the sides. Keatley’s first of four first-half penalties came after three minutes. However, it was Dave Kilcoyne getting the majority of the back slaps after the Leinster eight was wheeled into the Lansdowne turf.

Worst of all was Mike Ross having to put in a rare 70 minute-plus shift. He thought those days were gone but Tadhg Furlong and Marty Moore are not yet as durable as the master craftsman.

It was 6-0 after eight minutes with Bent almost certainly at fault.

Madigan pulled it back to 3-9 but scrum penalty number four came on the half hour. A psyched up Kilcoyne – perhaps revved by the Irish management overlooking him during the Six Nations – leaped away in delight as Keatley pushed it out to 3-12.

Madigan planted the chance from wide on the left only to miss his third strike from far right to leave Munster 12-6 ahead.

Time for Greg Feek to work some iPad magic, much like at the Millennium Stadium in 2011, and from the first engagement on the resumption of hostilities a steady platform allowed Eoin Reddan scamper up the touchline.

This was more like Leinster and by the 51st minute Madigan had them level.

Munster looked in all sorts of strife when Kilcoyne was dispatched to the sin bin by Alain Rolland for lying flat on the ball but they survived the ensuing onslaught when Keatley put an impressive choke hold on Gordon D’Arcy.

Still a scrum near their own line meant Tommy O’Donnell was hooked off for James Cronin. James Coughlan wasted no time shovelling it back to Conor Murray who cleared.

Guess who stuck the dagger in? An old man in rugby years, O’Driscoll’s quick pass to Shane Jennings was impressive but his line to receive the inside offload and dart over was pure class. It really is permanent.

O’Driscoll can’t stop scoring against Munster in recent times. And he got close to the posts for Madigan to make it 19-12.

Remarkably 14-man Munster scored next. A break out by Keith Earls was followed up by a decent Stander carry before Rolland gave Keatley a chance to make it five from five.

The next sight was the most worrying of all. O’Driscoll carried hard into two Munster men and appeared to damage that dodgy calf. And he wobbled back to his feet. Of course he waved Professor Arthur Tanner away, got back in the line and linked the play before giving way to Zane Kirchner.

That bloody calf and the need to patch up their heavyweight props will keep the Leinster medics busy over the coming days. The wounded will be desperate to play some part in the attempted dethroning of Europe’s Galacticos on their own patch.

Back at the Aviva a raft of replacements diluted this fixture as the subconscious perhaps wandered ahead to the Toulouse and Toulon challenges.

Not that Keatley was missing a beat. His 77th-minute penalty made it 19-18. He was flawless from the tee tonight. Couldn’t have done more.

But, after crossing in midfield by O’Donnell, Madigan’s late strike closed it out for Leinster.

Munster won’t miss O’Driscoll next season but on this evidence, yet again, the blue and green jerseys will. Desperately.