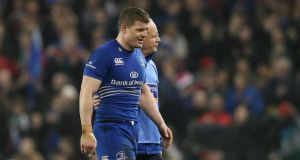 Leinster coach Matt O’Connor insisted Brian O’Driscoll’s injury was nothing to fear after the Leinster centre gingerly left the field late in the win over Munster at the Aviva Stadium on Saturday night.

O’Driscoll’s try in the second half proved crucial as Leinster came from behind to the beat their fierce rivals 22-18 and move five points ahead of Rob Penney’ side at the top of the RaboDirect PRO12.

His departure, to be replaced by Zane Kirchner, looked a genuine concern for the homeside and their fans, especially with a Heineken Cup quarter-final against Toulon next up on Sunday week.

However, O’Connor appeared sure there was nothing to worry about.

“He just got a bang on the neck.” said the Australian. “He was over the ball and he got his neck twisted, but he’ll be fine.”

After Leinster’s scrum was, at times, demolished by the Munster eight, O’Connor’s prognosis on prop Cian Healy will also buoy the home support. Healy sat out the game with an ankle injury but his coach is almost positive he’ll face Toulon at the Stade Felix Mayol.

“He was really close to playing this morning,” added O’Connor. “I’d be very surprised if he doesn’t take to the field next week.”

Penney was understandably more downbeat after he saw his rivals take “prime spot” in the league’s run-in, despite a powerful first 20 minutes from his side and six kicks from six for outhalf Ian Keatley.

His side took to the pitch without captain Peter O’Mahony, who felt a twinge in his hamstring in the warm up. It’s another concern ahead of their quarter-final against Toulouse at Thomond Park on Saturday.

“He’s had a bit of an ongoing thing with his hamstring during the Six Nations, I don’t think it’s too serious but once he said he felt it we decided not to risk him.”

In his absence, Damien Varley captained the side. He admitted to being “extremely disappointed” afterwards, having left the field early himself, though his foot injury is not a concern ahead of next week.

The hooker felt his side did not get enough from referee Alain Rolland, especially at scrum time.

“I talked to Alain, obviously he didn’t agree with me,” he said, adding: “It was very visible that we were very dominant in the scrum.”

Leinster outhalf Ian Madigan was adamant both teams could “take something out of that game” after each enjoyed periods of dominance.