Ivan Dineen gets chance at centre alongside Andrew Smith against Treviso 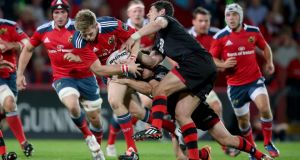 Treviso v Munster, Stadio Monigo, 7.35pm: In theory Munster have created the ideal scenario in which to evolve. As the first province to construct an indigenous coaching ticket under Anthony Foley they can instinctively nurture the principles that saw them soar to their greatest heights.

They just need the soles of their feet to survive the current bed of hot coals.

The email that went awry will be forgotten as soon as Foley starts winning matches. A more controllable worry is the neck injury sustained by incoming New Zealander Tyler Bleyendaal.

The blows kept raining down on Foley with Paul O’Connell’s late withdrawal on Wednesday night making this far from glamorous journey to a rugby outpost north of Venice even more difficult.

That said, if Dave Foley and Billy Holland can’t get to grips with this Italian pack – particular with support from CJ Stander, Tommy O’Donnell and Robin Copeland on debut – Donncha O’Callaghan won’t be long arriving off the bench.

James Cronin’s return at loosehead prop is another welcome sight while Felix Jones ascends to the captaincy in the absence of O’Connell and Peter O’Mahony.

Last weekend Edinburgh came to Limerick and beat them.

Foley’s hope, his belief, is the players feel the same way. Eight of them have not been given the chance to atone tonight.

The number 12 position remains a live issue. Andrew Smith has shifted to his more natural outside centre berth so Ivan Dineen gets a chance as Bleyendaal goes under the knife and JJ Hanrahan creeps back from a long standing groin problem.

It seems like an important position for Munster considering Foley’s vision of how they should play.

“Ah, we’re doing some things different. Some will remain the same. We’ve a different focus on how we want to go about it. We want to play with a bit more tempo, I don’t know if anyone had the time on how long the Edinburgh game took from start to finish, but it was very stop-start.”

The Rob Penney (and Canterbury) way is not completely shelved either.

“In terms of going wide-wide, as we did in the last few years, there’ll be an element of that but it’s not the sole thing we’re going about doing.”

For progress, this needs to be said of the players after tonight’s expected victory.

Treviso look a weaker outfit than Edinburgh who, in theory, were there to be cleaned out. No panic yet, just the need to see the brutality expected from a Munster team.