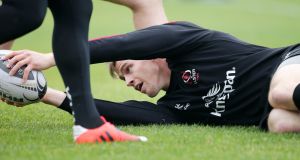 At last there is something to market for Ulster’s return to action after their three-week World Cup enforced break, as Andrew Trimble will become the province’s most-capped player when he takes the field for his 190th appearance.

It has taken Trimble rather longer than anticipated to reach this milestone, and overtake Paddy Wallace, thanks to succumbing for most of last season due to a debilitating toe injury – which ultimately wrecked his hopes of making Ireland’s World Cup squad – and then missing Ulster’s last outing, where they lost at the Scarlets, thanks to a hip injury.

“Overtaking Paddy Wallace’s total means a lot and it’s going to be a very special night for me,” said Trimble.

Trimble takes his place on the right wing with Craig Gilroy swapping over to the left flank in an otherwise unchanged backline.

The backrow has seen the most alteration as both Willie Faloon and Nick Williams have been culled with Robbie Diack and Sean Reidy coming in at six and seven respectively while Roger Wilson shifts across to number eight in place of Williams.

Ulster should have enough to keep their robust home record intact but must be wary as the Italians have only narrowly lost their first two games and did manage their only victory in Belfast four years ago during the World Cup window.