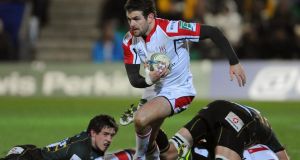 Jared Payne’s switch from fullback to fill the number 13 shirt against Cardiff in Belfast tonight is intriguing. Photograph: Tom Dulat/Inpho/Presseye

Perhaps this is a glimpse into Ulster’s and Ireland’s future shape. Joe Schmidt is charged with guiding the national team into life without Brian O’Driscoll. Hence, Jared Payne starting at 13 in Belfast tonight alone makes this worth watching.

Payne, a Kiwi who will be naturalised next season, has been playing at fullback since arriving on the IRFU’s “project player” scheme. But the 27-year-old’s reputation was built at outside centre for Canterbury and Auckland.

Darren Cave is the big loser, missing out on Ireland squad selection this week, and now losing his place in Ulster’s starting XV.

After a traumatic end to last season, a larger version of Luke Marshall has returned from successive concussions to nail down the number 12 jersey this season.

That means a slot must also be found for the equally talented Stuart Olding. Turns out the 20-year-old can showcase his vast array of skills all over the backline. “When the team was read out and I wasn’t playing at outhalf or centre, I thought I was going to be on the bench again, but I was really pleased when I learned I would be starting at fullback,” said Olding.

It may prove disruptive to Mark Anscombe’s settled side, but the current backline is definitely worth examining.

Same goes for Declan Fitzpatrick’s retention at tighthead. Schmidt will have to choose a reserve for Mike Ross next month. It’s a straight shootout between Fitzpatrick and Munster’s Stephen Archer, so John Afoa remains on the bench tonight.

Surprising
The rest is as you were, though it would be very surprising, again from an international perspective, if Ruan Pienaar is taking the place kicks ahead of Paddy Jackson.

Cardiff arrive with a strong looking side, though devoid of the injured Alex Cuthbert, but Wexford’s big number eight Robin Copeland is in serious form alongside Lions captain Sam Warburton.

It’s just a question of which Cardiff shows up. The side that flopped against Exeter or toppled the mighty Toulon.

The suspicion is the former and Ulster’s pack, without Nick Williams and Iain Henderson, should still have enough muscle to give their young backs plenty of ball.