“It’s certainly better than having to go away, there’s no doubt about that,” says Munster captain 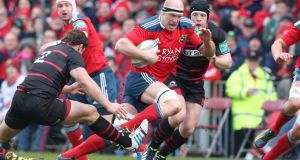 Paul O’Connell in action yesterday. “Over time as well as a team you begin to trust one another more.” Photograph: Billy Stickland/Inpho

“It’s certainly better than having to go away, there’s no doubt about that,” ventured Paul O’Connell. “But a team like Toulouse will have no fears of coming to us, and like us they’re a team that needs the big occasion to focus their minds.

“And I’m sure they will be relishing coming to Thomond Park now and if that is going to be the draw it won’t be a bad one for us because it will certainly focus our minds as well.”

It was, he admitted, incredible to think that one of Munster’s fellow ever-presents in the 19-year-old tournament have never been to Toulouse before. “Yeah, they’re a real traditional team, club with a traditional coaching staff with old school values, so there will be no better fixture to focus their minds than coming here.”

O’Connell shares Rob Penney’s view that yesterday’s performance was further evidence of Munster’s improvement, which he attributed to greater strength in depth, in turn increasing competition and standards.

“Over time as well as a team you begin to trust one another more. People say we have been in transition but we’re in transition for a long time now, but I suppose the nucleus of the guys are there for two years and there is a bit more trust developing.

‘Long way’
“It’s a long way from the finished article, Perpignan away, it was great to get the win, but the performance was fairly poor and there have been a few of those this year.

“However, there have been a few really good ones this year and there has been times when we were really close to producing a display like that, but I suppose the other thing is that Edinburgh, once they went behind, didn’t have a lot to play for and you could lull yourself into a false sense of security that everything is great. But at the same time it was a good performance.

“We attacked really well, we had a great mix to our game and I think we’re at our best when we can get that, mauls, scrum, direct play and being able to go wide as well. When we have that mixture and accuracy of our passing, we are a really good team.”

The sight of JJ Hanrahan and Ian Keatley working in tandem appeared to excite Rob Penney as much as anyone. “Fantastic,” was his instant verdict, “and the thoughts were that we were looking to do it on a number of occasions but for one reason or another we just haven’t been able to get there.

“The time was right and the opportunity was there and I thought they functioned beautifully together.”

Asked if it added another little dimension, he said: “Oh yeh, massive dimension, not a little one. I think it’s a big element to where things can go to with this group in the future.”

Penney also maintained that the backline especially was not getting the credit it deserved. “I know the work that goes in behind the scenes to get the back play to a level where we’d all be a bit more comfortable and they’re tremendous, Simon (Mannix) and Ian Costelloe and they’re doing a marvellous job I think in getting them into a position to be able to be more threatening,” he said.

‘Number of reasons’
“There’s a number of reasons around availability of players and injury issues and consistency of selection and so forth that just stifle us a little bit at times. I thought today they had a really good group out there and our back continuity play was ‘threateningness’– is that a word? I just made it one – was really good.”

“I think it was a glimpse in the try we scored against Gloucester last week, the interplaying and the ability to build pressure and offload and so forth. There’s just glimpses of it starting to unfold at a really nice time of year and hopefully the weather improves and we can keep playing multi-faceted attack. That’s what I’m alluding to I think.”

This had been a fifth Heineken Cup win in a row.

“I just see growth happening all the time. I think that this team is getting better and better all the time and more confident and I’m just so pleased for the lads that they’re able to come away from what could have been a potential disaster at Edinburgh and win five in a row and get themselves into the top four of the championship. No mean feat really.”

Alan Solomons, the former Ulster coach, noted: “A lot of what Munster are about is their heritage and their tradition and I think that plays a huge role.

“Particularly when they are at home here, where they get tremendous support at Thomond Park.