Just 5,000 fans from Clermont and Toulon expected to make the trip to Twickenham 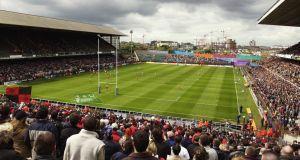 A previous all-French final between Toulouse and Perpignan at Lansdowne Road in 2003 attracted a crowd of less than 30,000. Photograph: Getty Images

Due to very real concerns that there will be vast swathes of empty seats at the 82,000-capacity Twickenham Stadium for this weekend’s European Champions Cup final, the organisers have allowed fans who purchased a ticket for the English Premiership final to claim a free seat this weekend.

Inadvertently, due to a technical hitch, a small number of fans were able to take advantage of the offer without even having bought a Premiership final ticket and were simply required to pay a booking fee.

Until recently European final tickets were being sold on Ticketmaster for €96. But in a separate offer tickets for the Premiership final on May 30th started at just over €40 and included a free ticket to the European final involving winners for the last two years, Toulon, and Clermont.

Tickets for the European showpieces are now available at half price and lower through various European Rugby partners.

The EPCR clarified their position regarding the ticketing strategy yesterday. “EPCR and RFU have now activated a number of initiatives and offers to maximise the attendance for the final,” they explained. “These include a number of value group offers targeting clubs, schools and colleges in England, and discounted 2 for 1 offers on particular ticket categories through GroupOn and other partners . . .

It means many fans were able to get two cup final tickets for much less than those who paid non-discounted prices for their European Cup final tickets when they were first available in August 2014.

Not for the first time in the history of the competition has it been difficult to sell tickets for an all-French affair outside of France as again fans have declined to travel in great numbers. If either Leinster or Saracens won their respective European semi-finals, organisers would have expected Twickenham to be full.

“ASM Clermont Auvergne and RC Toulon are expected to bring approximately 5,000 fans from France between them. This is Toulon’s fourth European final in a row outside of France,” added the EPRC.

UK news outlets report that Toulon returned 40 per cent of their ticket allocation, while Clermont were awarded 5,000 tickets, which equates to 16.4 per cent of the capacity.

“Clearly Toulon did not take up their full application,” said an EPCR source. “There has been innovation and efforts to maximise the attendance. You can be sure that those tickets being given away free with the Premiership final tickets are down the category. There is no figure yet available for the number of free tickets that were taken up.”

In 2003 organisers from the former governing body, the European Rugby Cup, had a similar problem when the final was at Lansdowne Road when Toulouse and Perpignan met and after a hard sell in the city, 28,600 attended the final. When Toulon and Clermont met in Dublin in 2013 the attendance was 50,148 while the all-French final at Murrayfield in 2005 between Stade Francais and Toulouse was watched by 51,326.

The EPRC, however, expect 50,000 to attend on Saturday and say they have sold close to 45,000 tickets already including nearly 35,000 sold before the two finalists were known. Another reason offered for the relatively poor turnout is the date of the final, which takes place four weeks before the end of the Premiership, Pro12 and the French Top 14 seasons.

In past Heineken Cup competitions, the final was held on the penultimate weekend of domestic seasons, and EPCR have already confirmed next season’s final will take place in mid-May rather than at the beginning.