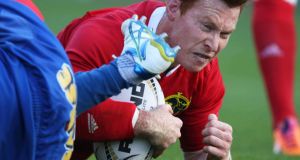 Tyler Bleyendaal made an impressive debut for Munster, but two tries from former Ireland under-20 Denis Coulson gave Grenoble a second win of their Irish pre-season tour.

Bleyendaal came though a successful 30 minutes and played key roles in two of the three tries.

Grenoble started brightly with a ninth-minute try from hooker Laurent Bouchet, but the home side took over as tries from Cathal Sheridan and Shane Buckley gave them a 12-7 lead.

Bleyendaal sent Matt D’Arcy in for a try in the 25th minute before the New Zealander was replaced by debutant Bill Johnston after 30 minutes.

A finish from lock James Percival made it 19-14 at the interval and another from replacement Gio Aplon in the 44th minute levelled matters.

Darren Sweetnam made the most of a sloppy Munster maul to score his side’s fourth try four minutes later, but two tries in three minutes from Coulson put Grenoble in control.

Buckley pulled Munster to within two points with his second try 14 minutes from time, but Arnauld Heguy’s late score sealed it for the French.