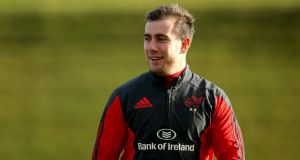 JJ Hanrahan: will be under the spotlight when league leaders Munster take on Glasgow Warriors at Scotstoun. Photo: James Crombie/Inpho

The auguries look promising, first versus third in the table and a repeat of last year’s Guinness Pro12 semi-final at today’s venue in which the Glasgow Warriors squeezed home, 16-15. The only cavil is that both teams are appreciably below strength through a mixture of injuries and player management programmes.

Munster coach Anthony Foley makes eight changes from the side that lost to Clermont Auvergne last week, the majority of which can be found in the pack. John Ryan maintains his place at loosehead prop and is joined by young hooker Kevin O’Byrne and tighthead Stephen Archer.

The home side have sold 6,000 tickets for the game.

Munster will know a lot more about the depth of their squad after this match and how Hanrahan manages the game from his favoured position of outhalf. Glasgow look a little stronger in key positions but Munster’s grit and work ethic might help secure them a bonus point.