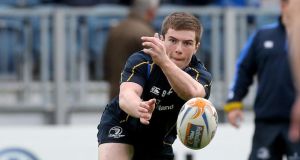 Success in the long term for Irish rugby may be frustrating coach Mike Ruddock as his Under 20 side prepares for Wednesday’s start to the Junior World Championship in France. But meeting Australia in the first game without Stuart Olding and Robbie Henshaw, both tied to the Irish squad’s tour of the USA and Canada, is some indication that the Irish underage system is fit for purpose.

It won’t aid Ruddock’s cause against the Wallabies, Fiji and New Zealand that the Connacht and Ulster pair are missing but the Welshman sees no need to panic despite facing into three hugely physical Pool B games.

Ireland’s highest finish in the under-20 event is fifth but Ruddock sees other benefits that come out of the experience, Olding and Henshaw shinning examples.

“I think one of the things we perhaps haven’t always managed as well as some of the other nations is how we actually accelerate the development of some of the younger players and fast track those ear marked for senior international honours,” said Ruddock at yesterday’s squad announcement in Dublin. “And I think all of a sudden it’s happening for us. I’m really excited for those guys and I’m sure these lads will take inspiration from that.

“I’m sure this crop will be thinking if I can play well in a Under-20 Six Nations I can make a World Cup or even make a senior tour or get ear marked for senior honours provincially or internationally. That’s a really good thing and it also opens the doors for a couple of other guys as well

“Yeah, ideally it would be better to have all your best players in the Under-20 World Cup but the ultimate goal for every player is to play for their country at senior level and that opportunity has arisen for Robbie and for Stuart and we think it is a very positive thing.”

Captain the side
Leinster’s Luke McGrath, who made his debut start for the province this season against Ospreys, will captain the side while five other players, who were not involved in the Six Nations campaign have been added, Edward Byrne, Adam Byrne, Thomas Farrell, Daniel Leavy and Jack O’Donoghue, with other experienced players such as 6ft 4in centre Chris Farrell missing out through injury.

At last year’s tournament Ireland shocked the South African hosts with a win before the home team went on to claim the tournament. Ireland have also beaten England and France in recent months, but the current focus goes no further than the first game against Australia on Wednesday.

“We haven’t had much footage of them,” added Ruddock. “They only played against Papau New Guinea and beat them I think 92-0, so we won’t get much out of that one. They will play Scotland before the World Cup starts so we’ll have a little look at that.

“If you look at Australia teams generally they’re going to play a high tempo game, a big passing game. They’re going to have all sorts of angles, running in loops. We’re going to put a lot of work into our defensive structures.”

Ireland’s pool games will be broadcast live on TG4 along with the semi-finals and finals of the tournament.