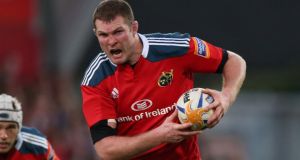 The club has been taken over by a consortium headed by Irish businessman Mick Crossan, chairman of recycling and waste management company Powerday, who have been the team’s headline sponsor since 2011.

Based in London, Crossan regularly attends fixtures at the Madejski and is expected to begin a recruitment drive to reaffirm the club’s Irish identity.

London Irish declined to comment yesterday on whether they were targeting the Munster secondrow Ryan.

“We clearly want an Irish connection,” said a spokesperson last night adding that with players out of contract they may look at the Irish market

Ground decision
One of the big issues for the new owners will be whether to move away from their home at Madejski Stadium.

The Exiles have been playing at Reading FC’s ground since 2000 but have struggled to fill the 24,161-capacity venue, registering an average attendance of just over 9,000 last season.

Irish are currently six years into a contract that lasts until the end of the 2025-2026 season.