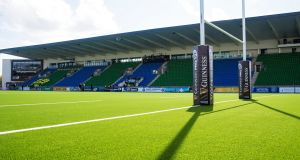 According to Gregor Townsend of the Glasgow Warriors last weekend, “It’s going to be tough; they’ve always been excellent around the breakdown. They picked three opensides today”.

Factor in a lively Leinster backrow, two quality teams, a real rugby referee in John Lacey, excellent conditions and the Scotstoun synthetic pitch, and rugby takes on a vastly different hue. Especially for the full house (7,251 full – really!) who, over the course of the season, will be served up way more tries on this surface.

Is it only a matter of time before the professional game converts entirely to these “fast” pitches? Slobbering around in the winter muck has long been part of our game but the synthetic surface changes everything.

Some weeks back I attended a Munster under-20 club meeting, where the fall-off in player participation was discussed. An idea is gathering that to lift club sides struggling to fill a full match-day squad, and subsequently pulling out of the domestic leagues, a tens rugby tournament blitz could make engagement easier and more fun. Super idea from Munster.

But what of the law of unintended consequences? Having played in the Hong Kong Tens, I note the skill set required to play tens is not vastly different, but it does force front-five players on to the ball and in to open space where defences are less able to hammer them early. Secondrows, all of a sudden, will have time on the ball in space; no hiding space! What impact, in time, will this have on their ambition and skills?

Back to the synthetic pitch in Scotstoun. I’ve long been fascinated by the body shapes of individuals and teams across the various competitions and countries. (See youtube.com/watch?v=w4U5S0fR74o for an extreme example.) In broad brushstrokes, the English and French leagues have favoured big bashing ball-carriers that “create” space for speedsters to exploit. Hence their body shapes demand more meat. Look at recently retired scrumhalf Eoin Reddan’s body-shape journey from when he started in Ireland many moons ago through his time in Wasps and then back in Leinster.

At its height, Leinster’s game demanded pace on the ball; the English game has this, but its essential element is bashing. To survive this environment, players need extra kilograms. French domestic league statistics inform us that the ball is in play less; hence the game is slower, more suited to bigger players. Now compare that to the southern hemisphere physique, and particularly that of the All Blacks.

Conditions have an impact on style and subsequent body shapes. Look at the sunny Guinness Pro 12 final, when Connacht’s back three attacked from deep.

With all this in mind and a Lions tour this season, I’m especially excited to watch Glasgow Warriors secondrow Jonny Gray and his like playing regularly on Scotstoun’s synthetic pitch. He certainly has the bulk at 119kg, but it’s his skill set that may flourish. Under Townsend, Glasgow require way more from their secondrows than we are familiar with here in Ireland.

It’s never ceases to amaze me that, preseason after preseason, our elite players arrive with a fresh outlook, excited by the season ahead: Connacht as champions, Munster with Rassie Erasmus; Leinster with Graham Henry, and now Stuart Lancaster; and Ulster, well, with Ruan Pienaar. Those six weeks or so are typically in the best weather of the year, but no sooner do the matches start flowing then so too does the rain.

The Scotstoun pitch reduces the negative impact of this, affording Townsend a real chance to develop exciting rugby, not just on match day but on every training day also. More tries will be scored and more people will attend.

Over time, synthetic pitches will change rugby styles and ultimately body shapes. If we were to add in restrictions on the use of the bench, then stacking the subs with monsters would be less advantageous. A player that can’t play 80 minutes should not be allowed to rise from the bench with 20 minutes to go. In recent times, the advent of 20-minute impact players has changed physical shapes entirely.

Essentially, rugby is about creating space before exploiting it. So as teams grow tired and have a limited bench influence, more skilled teams will find holes and win matches. Sound attractive?

In the meantime, the extremely talented Leinster outhalf Joey Carbery will soon become judged on his ability to manage his assets in all sorts of weather. Then, and only then, will we know his true quality.

However, he appears very comfortable bringing the ball to the line, in heavy traffic, before he finds the most suitable recipient. In time, his team-mates will read this skill earlier and earlier, timing their runs from deep and terrorising defences.

Finally, having watched four provinces play last weekend I do declare I noticed the first first-phase try of the season when left winger Tom James crossed for Cardiff on 34 minutes. It came from an attacking-off-the-top lineout to Cardiff scrumhalf Tomos Williams on Munster’s 10-metre line. He fed his outhalf, Gareth Anscombe, who popped to his switching midfield, Reynold Lee-Lo, who had Williams trailing inside him to finish off. Why do we not see more of these? Tens rugby and synthetic pitches . . .