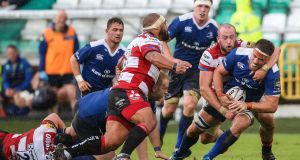 Foothills of the Dublin mountains provided a backdrop as Leo Cullen reviewed several combinations in preparation for the steep incline ahead.

David Humphreys’ Gloucester eight, and secondary eight, gave this hardly imposing Leinster pack an idea of just how physically taxing this season promises to be.

The opening 40 minutes was book-ended by tries from David Halaifonua.

In between, Leinster gave this 1,866 crowd some encouragingly expressive moments, and four tries. The Cullen focus in preseason has been to return to the skill set that delivered three European titles.

That and the urgency attached to finding a replacement for the soon to be departed defensive coordinator, Kurt McQuilkin (heading home to New Zealand for family reasons).

Three fine first half tries were gathered, two by a maturing Nick McCarthy, taking the opportunity to shine before Jamison Gibson-Park gets to show his value after several seasons understudying for TJ Perenara at Super Rugby champions the Hurricanes.

The first try came off impressive yardage by Hayden Triggs, of all men, before a clever McCarthy snipe caught Gloucester’s defence cold. Try number two must be put down to more sloppy play from the visitors as Adam Byrne stayed alive to profit from a neat Niall Morris grubber.

The third try was pure class. Bryan Byrne stood up former Ulster prop Paddy McAllister before an inside offload allowed van der Flier to free his hands and send McCarthy sprinting clear. There was even some delicate scrumhalf play by 21 year old tighthead Jeremy Loughman.

New teams for the second half but Leinster continued to punch holes despite a heavy downpour. Joey Carbery looks every inch the quality flyhalf that led Clontarf to the AIL last season. His beautifully timed pass guaranteed a try for Rory O’Loughlin in the 55th minute.

The way Carbery glides towards, or around, the defensive line deserves some Pro 12 exposure in the coming weeks (Johnny Sexton will be recovering from shoulder surgery until late September).

Other points of information: Girvan Dempsey seems to be developing Zane Kirchner into an outside centre, presumably as an insurance chip should Garry Ringrose join Robbie Henshaw in the Ireland squad. Andrew Porter seems more than comfortable amongst these alpha props while Jack Conan looks poised for a massive impact in blue this season (that is until he hobbled off).

The last preseason match is against Bath at the RDS next Friday.