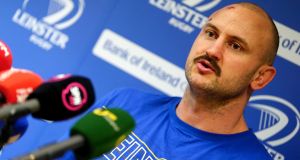 Leinster lock Hayden Triggs is a former Kiwi soldier and a straight shooter. When he saw his team-mate Mike McCarthy being carried off on a stretcher last weekend in Stade de France, he was shaken. Neither Triggs nor McCarthy are known as shrinking violets.

In a candid interview Triggs spoke of his growing fears about rugby because of the size players have become, with backs now bigger than the size forwards used to be.

That is not an original observation from the former Maori All Black but as a secondrow he is facing opposition centres who are his size and weight, around two metres and 108 kilos.

“Aw look, I’ll be honest, I’m scared about it,” said Triggs. “When I saw Macca [Mike McCarthy] go down and for him to go off on a stretcher . . . Normally if you get a concussion, they sit you up, feel your neck and then you walk off.

“But he’s on a stretcher, man, with his neck tied down. That’s scary. I’ve got kids. I’ve got a wife. I’m on the other side of world from home. I don’t want that to happen to me.”

“People up here focus more on the collision,” says the New Zealander. “We try to avoid contact down there. I know that sounds silly but whenever you talk about a ball carrier going in to contact you try to pick a weak shoulder or get a step around the outside shoulder.

“I don’t want to say the coaches tell us to look for a collision . . . Don’t get me wrong, head knocks are happening down there. It is happening everywhere. It is just rugby, man. Everyone is getting too big.

“Concussion is getting more and more of an issue. You can’t escape it now. I took a knock to the head just in a ruck and it kind of rocked my head and the doc is straight over, ‘Are you alright, are you feeling okay, how you feeling?’ and I’m just like, ‘Leave me alone’.

“But that’s the focus. Everyone is massive. You look at our backs now all over the world. They are over 100 kilos, easy, nearly everyone. Half-backs are getting that big.”

Having played club and provincial rugby in New Zealand, Triggs has faced the best and biggest players in the game. Now almost 34 years old his career is in its twilight. But he grew up with figures like forward Zinzan Brooke and All Black centre Tana Umaga.

“We spend so much time in the gym now. Power is the focus of strength training. I don’t know if I’m meant to be talking about this but they’re not super athletes but they’re kind of heading that way.

“I’m no scientist or I’ve got no background in the research but surely in the weight of our players and the power they run with, over the years, surely when they’re 95 kilos, the concussions have increased with those kind of stats.”

But it is not only during matches that players face heavy collisions. The need to start matches also makes training mid-week adversarial.

“At training, we smash each other on two days of the week,” says Triggs. “In review, when you’re watching your defence or someone else’s, you see some pretty ugly things, some pretty scary things.