Leinster do their part despite sloppy win over Ospreys 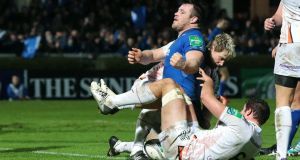 Leinster 36 Ospreys 3: Job done, if not tidily. Leinster ensured the presence of three Irish teams in the quarter-finals of the Heineken Cup and maintained their outside hopes of a home quarter-final with a bonus point. They’d have taken a five-try win beforehand, but not after such a scrappy, unsatisfying night at the RDS.

Leinster can now put their feet up for the weekend and watch events unfold, while hoping for two favourable results out of four; namely Toulon losing in Glasgow, Toulouse failing to win in Zebre, Munster failing to achieve a bonus-point win at home to Edinburgh and Clermont failing to beat Racing at home.

There was further evidence of Cian Healy’s return to his vintage best, and Luke Fitzgerald again looked sharp, but given two of their tries were penalty tries against opponents reduced to 14 men for an hour, they left a good few more tries behind.

The game hinged on the 20th-minute sending off of the Ospreys’ Welsh and Lions lock Ian Evans. After their lineout maul had marched forward, Mike McCarthy emerged with the right side of his face severely bloodied, forcing him from the fray and prompting Romain Poite to call for the TMO, compatriot Laurent Valin.

Walking closer to the big screen, Poite asked for repeated viewings which showed at least one downward stamp as opposed to a backward movement.
Evans was the primary offender, standing upright at the apex of the drive having gathered the throw rather than one of those marching the maul forward, and Poite unhesitatingly brandished a red card.

By then, they had lost centre Ben John, and with only two backs on the bench brought on outhalf Matthew Morgan, with that thorn in Leinster sides, Dan Biggar moving to midfield. Tyler Ardron moved into the secondrow of a seven-man scrum and by the half-hour mark they also lost the Bristol-bound Ryan Jones to injury. It was that kind of night.

Leinster’s rejigged frontrow and pack earned a penalty from the first scrum when the Ospreys went flat to the ground as Leinster sought to put on a shove. It looked a fair enough call by Romain Poite and Gopperth opened the scoring although when Rhys Ruddock was pinged for not releasing Dan Biggar, needless to say, landed the 47-metre penalty.

Cue the dismissal of Evans, and Leinster sought to turn the screw at scrum time, but they became ragged. Even Brian O’Driscoll was shaking his head after a loose attempt to change the point of attack with a huge looping pass to Rhys Ruddock which came with a red cross on it.

Going down the line from a penalty, the Leinster pack started a perfectly choreographed maul off a take by Leo Cullen – on for McCarthy – which began driving remorselessly forward. As the Ospreys repeatedly came in from the side, before going to ground, Poite jogged in under the posts for a penalty try. Within two minutes, Martin Moore charged through the guts of their defence, finding Jimmy Gopperth in support but as he rolled over and reached for the line when double-tackled by Rhys Web and Jeff Hassler, the latter’s foot inadvertently prevented the try.
Not to matter, soon Leinster were attacking off another Cullen take out wide, Gopperth and Rob Kearney injecting some momentum, before direct carries by Jamie Heaslip, Healy and Ruddock culminated in Healy ploughing over. Game over.

Soon replacement hooker Scott Baldwin hobbled off, also leading to uncontested scrums and Adam Jones taking over the throwing. And Leinster ought to have struck immediately after a break by D’Arcy which led to him hobbling off, but Zane Kirchener and Dave Kearney contrived to butcher it.

Other opportunities were missed before another lineout maul led to another remorseless scrum which led to another penalty try, and 17 minutes or so to obtain the bonus point. But after Heaslip charged off another big scrum, Reddan dropped the ball as he went for the line when tackled by Morgan, which typified the resistance shown by Alun-Wyn Jones, Justin Tipuric and co.

This was offset by the standing ovation for the arrival of Richardt Strauss after his remarkable journey to this point, from Bloemfontein to playing for Ireland and last night’s near miraculous return after heart surgery in October. Leinster kept pummelling away, and Jordi Murphy finally secured the bonus point with a hard straight line from deep off a popped ball by Isaac Boss.

The shackles released, Heaslip ran hard and offloaded in turn for Boss to run in the fifth try.