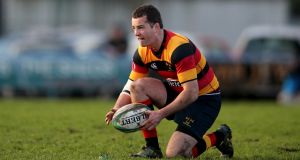 UCD’s lead at the top of Ulster Bank League Division 1A was cut to four points after Lansdowne got the better of them in a 22-20 verdict on Saturday.

The students’ six-match winning streak in the competition came to an end on the Aviva Stadium’s back pitch, with Lansdowne captain Scott Deasy playing a central role with a 17-point haul.

Outhalf Deasy kicked five penalties and converted a second half try from Leinster’s Cian Kelleher, as Mike Ruddock’s men climbed one place into fifth courtesy of their third straight victory.

It was tough for the league leaders to take as they outscored Lansdowne by three tries to one – forwards Liam Hyland and Josh Murphy and centre Jamie Glynn touched down – but former Munster player Deasy took on the mantle of match-winner once again.

Young Munster pipped Cork Constitution by a single point for the second time this season as they took the spoils 18-17 at Temple Hill. Forwards Seán Duggan and Alan Ross both crashed over in the second half to send them in front.

Clontarf ended a two-match losing streak in the league with a hard-earned 17-5 victory at Galwegians, helped by tries from young props Vakhtang Abdaladze and Ivan Soroka.

Bottom side Ballynahinch dug deep in defence for their first away league win since last March, as they toppled Terenure College 20-9 at Lakelands Park. First half tries from David McGuigan and Jordan Grattan did the damage.

Meanwhile Buccaneers edged Ballymena (30-25) at the end of a thrilling Division 1B clash at Eaton Park.