League title sealed with yet another attacking show 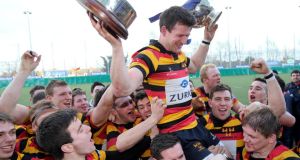 Lansdowne captain Ross McCarron after his side clinced the Division One A title against Clontarf on Saturday. Photograph: Cathal Noonan/Inpho


Lansdowne’s coronation was duly completed on the Aviva Stadium back pitch on Saturday with a flourish. In truth, Clontarf put it up to them and the newly-crowned Ulster Bank League champions were not quite at their most fluent, yet it says everything about Lansdowne’s attacking brand of running, offloading rugby that a fourth try with the game’s last play earned them a ninth win in a row and 10th attacking bonus point.

They thus opened up a remarkable and unassailable 23 point lead to complete their first AIL title with a couple of games to spare, captain Ross McCarron lifting the trophy and being hoisted into the air by his jubilant team-mates in front of about 900 supporters.

Coached by Mike Ruddock and Emmet Farrell, the average age of their squad is 24. In all they have used 42 players this season, with their investment in their underage structure and Ruddock’s inside knowledge of the Irish under-20 set-up reaping rewards.

“When I came here two years ago I said that with the facilities we’ve got, with location and everything going for us, we should be looking to be one of the most potent forces in the league and we’ve got to work to do that,” said Ruddock.“In fairness to the boys they trained really hard. We’ve put our gym programme in during the summer which has born a lot of dividends. The boys come in at 7am and train on their nights off and as well as their rugby sessions they’re trying to be as professional as they can be.

Hero on the day was centre Mark Roche, whose superb footwork, eye for space and offloading helped initially turn the game their way as he created the first try for winger Seán Casey and then added his own fifth try of the campaign within three minutes with a superb finish by the corner flag.


Prolific campaign
Craig Ronaldson’s touchline conversion brought up his 200th point of a prolific campaign before he added a drop goal in between Frank Cogan’s try off a driving maul and a second Richie Lane penalty for a 17-13 interval lead.

After a close-range try by flanker Simon Crawford had helped Clontarf to deservedly draw level, the outstanding Ron Boucher restored Lansdowne’s lead from the base of a powerful five-metre scrum. Again though, Clontarf wouldn’t go away but after an opportunist 78th-minute try by Colm O’Shea, Lande’s conversion to draw the sides level hit the post.

Instead, fittingly, Roche pounced for his second try. “He’s probably the most improved player all season,” said Ruddock. “I’ve seen him for a little while but I watched him closely with the Connacht under-20s this year and originally didn’t quite make the Irish under-20s squad this year, and eventually with a few injuries he’s forced his way in and he’s just got better and better ever since.

“His exposure at AIL level has helped. It’s a good breeding ground for AIL players and Rochey came through today. I guess with that hair cut,” said Ruddock of Roche’s barnet, with its shaved sides, “he had to deliver really.”

4 Six Nations 2021: The only way is up for Wayne Pivac and Wales

Allaho could be Ryanair bound after assured win at Thurles 14:13
Tadhg Furlong could be fit for Ireland’s Six Nations opener against Wales 13:18
Arsenal sign Real Madrid’s Martin Odegaard on loan 12:12
Sergio Garcia has his eyes set on September’s Ryder Cup 12:05
Six Nations 2021: The only way is up for Wayne Pivac and Wales 09:57
Crossword Get access to over 6,000 interactive crosswords