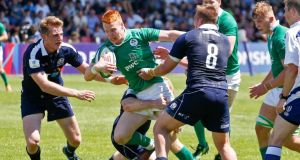 Ireland were flattered by the final margin of defeat as Scotland played a superior brand of rugby, scoring five tries to three in the process as Ireland’s hopes of making a semi-final of the Junior World Championship evaporated in the sweltering temperatures in Kutaisi in Georgia on Sunday.

Peter Malone’s charges were already under pressure following an opening defeat to Italy and despite taking an early 10-point lead against the run of play, their try line led a charmed existence before the finally succumbed to Scotland’s gorgeous attacking patterns; albeit facilitated by brittle Irish defence.

If outhalf Connor Eastgate had been more accurate with his place-kicking and the lineout not been pillaged relentlessly early in the second half, the Scots would not have had to endure the prospect of losing the match right up to the final whistle.

This young Irish side showed great character to hang in there in difficult circumstances – nine of the matchday squad are eligible again at this age-grade next season – and in right wing Jack Kelly had a player with the footwork, pace and power to provide a cutting edge, evident in his brace of tries.

Ireland, for the most part, lacked a little ambition, relying on one-out runners and taking the Scots on in a very direct fashion. It was effective at times but limiting too and generally pre-empting the ball being kicked away; only when chasing the game did they played with greater urgency and width.

The Ireland defence has been an issue all season and it was brittle and passive initially, improved appreciably with greater line speed, but then undone again by basic missed tackles that will make for a very painful review.

Alan Tynan had a fine game at fullback but the team would profit from him playing in his more natural position of outhalf, bringing that direction and poise. Kelly gave Ireland that cutting edge on a day when a number of Irish players produced off colour performances.

Ciaran Frawley worked tirelessly, while Jack Stafford was lively and sharp at scrumhalf, taking his try smartly with some clever, quick thinking. Ronan Kelleher had an excellent game at hooker, while the back five in the pack all contributed handsomely, led by their tireless captain Paul Boyle.

Gavin Coombes made a huge contribution when introduced at halftime and along with clubmate Fineen Wycherley carried the game to Scotland but the best players on the pitch were all wearing blue, notably fullback Blair Kinghorn, wing Darcy Graham, secondrow Callum Hunter-Hill and number eight Matt Fagerson.

Scotland’s offloading game and the width they put on the ball made them irresistible at times. Ireland trailed 12-10 at the interval but three second-half tries allowed them a breathable leeway to the final whistle.

Ireland play New Zealand on Thursday (12.30) – they may opt for rest some of their better players – and their prospects look grim. Lose and they could find themselves in a relegation struggle over the final two matches in the tournament.