Warren Gatland set for Lions job ahead of Joe Schmidt 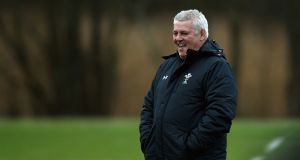 Warren Gatland is set to be named Lions coach ahead of Joe Schmidt. Photograph: Getty

The British and Irish Lions are to name their head coach for next summer’s tour to New Zealand on September 7th, with Ireland boss Joe Schmidt likely to be overlooked for the role.

Wales’ Warren Gatland is expected to retain the position he held for the series triumph over Australia in 2013 when the chosen candidate is unveiled at a press conference in Edinburgh.

The IRFU had said earlier this year they would not stand in the way of Schmidt were he selected to lead the tour in his native country.

This was despite the Kiwi, who masterminded back-to-back Six Nations titles in 2014 and 2015, previously saying his Ireland contract didn’t permit him taking the role.

However, Schmidt’s availability is unlikely to become a factor, with compatriot Gatland in line to pick up where he left off in 2013.

Eddie Jones would have been the clear favourite had England’s head coach and his Rugby Football Union paymasters not stated categorically in the aftermath of the 3-0 whitewash of the Wallabies in June that he is unavailable.

Jones has enjoyed a remarkable maiden year at the helm, masterminding a first Grand Slam for 13 years before presiding over the rout of Australia — just months after virtually the same squad of players had slumped at the World Cup.

RFU chief executive Ian Ritchie has made it clear to the Lions’ board that the 56-year-old Australian is not to be considered, while Jones himself has said he is “completely unavailable” in order to focus on building for Japan 2019.

It clears a path for Gatland to preside over the elite of British and Irish rugby for a second tour having led the 2013 party to a first series victory since South Africa in 1997.

Wales fell to a 3-0 whitewash by New Zealand in June, but Gatland is an experienced and canny operator and keen to reprise a role he performed with distinction three years ago.

Furthermore, the Welsh Rugby Union has granted the 52-year-old Kiwi permission to take the eight-month sabbatical from his national post demanded by the Lions.

Wales lock Alun Wyn Jones and England hooker Dylan Hartley are the main contenders to captain the Lions through a brutal itinerary headlined by two Tests in Auckland and one in Wellington.