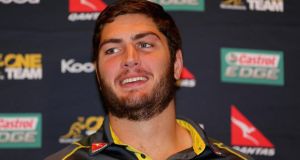 Australia coach Ewen McKenzie sprang a surprise yesterday, naming the towering two-metre Rob Simmons at blindside flanker for the first time for the test match against Italy in Turin tomorrow.

The 24-year-old replaces the injured Scott Fardy in the only change to the side that lost to England 20-13 last week. Fardy suffered concussion early in the second half but McKenzie expects him to be fit for next week’s test against Ireland in Dublin.

With James Horwill and Sitaleki Timani in the second row and Simmons in the backrow, McKenzie’s move is aimed at nullifying the powerful Italian pack.

“We’ve looked at Italy and we want to take them on at what they’re good at,” said McKenzie. “It’s a different focus. Italy . . . will try to take us on in the set piece. You have to deal with where the ball is first, not where it might be.”

Simmons returns after a knee injury.

“Statistically Simmo is in our top two in terms of defence . . . he’s probably the second most athletic guy in the forward pack,” said McKenzie.